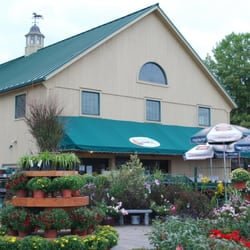 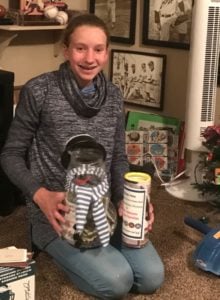 while another $30-plus was contributed by patorns of Brother's Pizza. 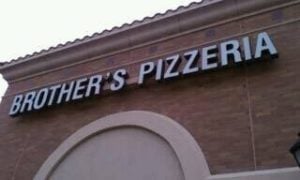 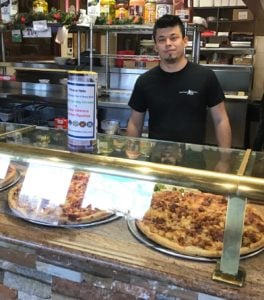 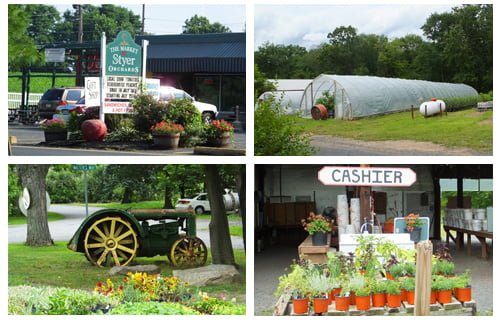 for allowing us to have a collecction jar near their check-out counter to assist us in our continue efforts to provide holiday meals for needy veterans and their families … particularly in this season when so many people are celebrating Christmas, Hanukkah or Kwanza.

We are also apprecaitive to Styer's incredibly generous customers who, in one week, donated $238.86 for out veterans!

From November 25 1910 to the present the Styer Family Orchard has been passed from generation to generation dedicated to the cultivation and harvesting of produce for sale to the public and to the preservation of the site for the education of future farming. The Styer family has conveyed this 107 acres to the Township of Middletown on January 4, 1999 to remain in perpetuity as a living testimonial to our agricultural history. 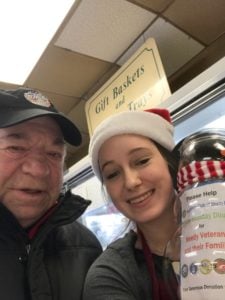 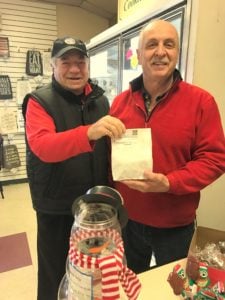 Mark Nath and Irv Perlstein were again joined by volunteer trumpeteer Tony Primola (who entertains customers and passers-by with his Christmas and holiday music) outside Penny's at the Oxford Valley Mall in Langhorne on today's last day for "ringing the bell" ofr the Sallvation Armly's 2018 Kettle Drive. 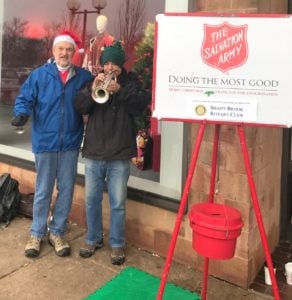 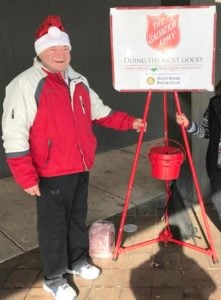 Thanks to all those who;ve donated over the past six week … including those perhaps dropping coins into the kettle for the first time! 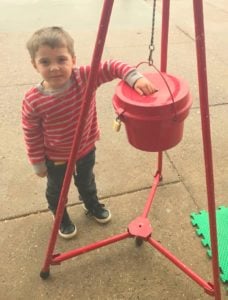 Thanks to the coordination of Congressman Brian Fitzpatrick, Irv Perlstein was able to present gift certificates to provide holiday meals for needy veterans and their families to the Langhorne's Jesse W. Soby American Legion Post 148 this morning. 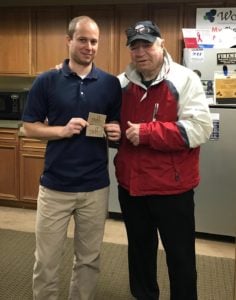 The funds to purchase these gift certificates came through teh generosity of customers of ShopRIte, McCaffrey's and Clonial Farms … who enabled the Club to set up a able abd solicit for this worthwhile cause. 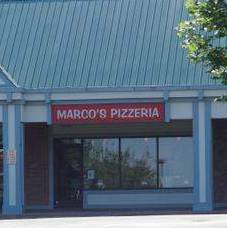 for their continued suport of the Club's ongoing fundraising efforts on behalf of the Leukemia and Lymphoma Society. 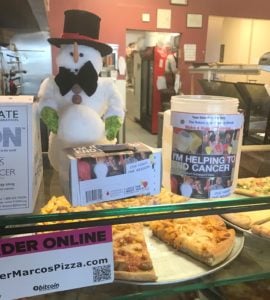 as well as Shady Brook Farms 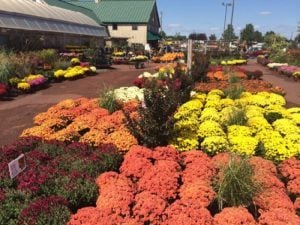 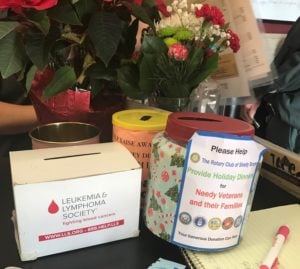 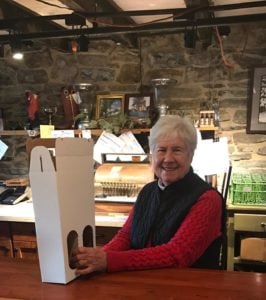 … which has a primary focus on Veterans and First Responders … originating from the Philadelphia Fraternal Order of Police Lodge 5 and broacast on WBCB (AM 1490).

Tom, who had spoken at our breakfast meeting this morning, expressed his amazement at the number of programs and initiatves in which our Club is actively involved.  Irv and Dick then provided an overview of just a few of the Club's activities, including: 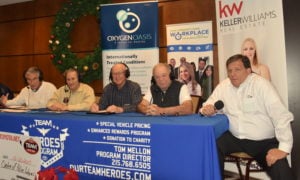 Joe Szafran made a subsequent presentation on the Tour's unique and moving way of honoring the nation's veterans, transporting United States Military Veterans from the Bucks County area to Washington DC to visit many military and other memorials, buildings and other places that promote and represent the ideals of the United States of America.

At present its major focus is WWII veterans and terminally ill veterans, who are given top priority. The Tour is also accepting applications for Korean War veterans at this time.  On May 7th, 2018, a similar tour for Vietnam Veterans is scheduled.

The Club was able to make a presentation of gift certificates to provide holiday meals for needy veterans to Bob Craven, president of the Guardians of the National Cemetery which they will deliver to in-need vets. 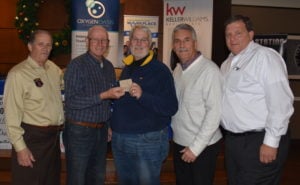 Irv and Dick were honored to be invited to participate in the presentation of a check from Team Toyota to the Philadlephia FOP. 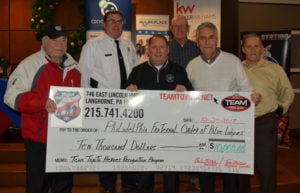 Their on-air segment can be heard beginning 36 minutes and 15 seconds into the show's podcast at http://www.wbcb1490.com/tv/watch-lets-go-places-with-tommy-toyota-live-on-wbcb-tv/.

We'd also like to acknowledge and thank one of the show's sponsors, Ashley Thomas or Keller WIlliams in Langhorne who has offered her assistance in promoting participating in our 2018 charity golf outing.

Tom Mellon, Program Director for Langhorne's Team Toyota and host of several WBCB (AM 1490) radio talks shows, most imporant being his Veterans and First Responders Awareness. 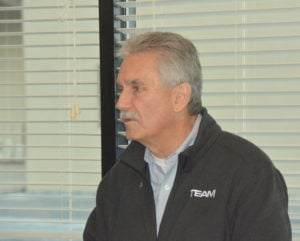 Tom, a Philadelphia native who grew up in the Northeast/Mayfair section of the city … spent 12 years in the  Catholic parochial school system followed by two years at Philadelphia Community College before attending and graduating from Temple University.  Married to his wife Geri, he has four wonderful children and three grandchildren.

Before beginning a seconcd successful vocation at Team Toyota, Tom Mellon retired from a first career as a Philadelphia police officer. 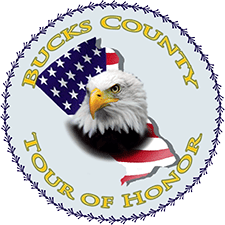 …whose mission and sole purpose is to transport United States Military Veterans from the Bucks County area to Washington DC to visit memorials, buildings and other places that promote and represent the ideals of the United States of America; with a major focus on World War II veterans and terminally ill veterans.

He also spoke passionately about other programs with which he is involved, especially those that reach out to some of Philadelphia's most vulnerable youth … causes that resonated with our members due to our Club's eight-year involvement with and ongoing commitment to the city's William Dick School.

Tom has been the recipient of several of the holiday meal gift certificates to feed needy veterans and their families that the Club purchased from fundraising outside area supemarkets … as his veterans' network has been able to identify  in-need vets and personally distribute the gift certificates to them.

Other WBCB shows Tom hosts include Dining Around, Let's Go Places and Your Health.

He also received kudos from Club members who have personally purchased of leased Toyotas through Tom!

Several Club members brought coffee, fresh fruit, bagels and pastries for a visit with Phil Huber at Manor Nursing Home in Yardley this morning.  While Phil … who for many years was a stalwart of our Club and was predictably involved in nearly ever one of its activities … has unfortunately lost the use of his legs, his hand shake remains firm and strong, his mind sharp as a tack and his smile as infectious and contagious as ever!

Phil's presence at our weekly meetings is greatly missed and he and his wife Kathy remain in the thoughts and prayers of each of the Club's members.

Our very best wishes to Phil and Kathy for a Merry Christmas and a safe and healthier New Year!

For the sixth weekend in a row, Shady Brook Rotarians rang the bell for teh Salvation Army's Kettle Drive at the Osford Valley Mall.

and was releived by Jeff Revek and his family. 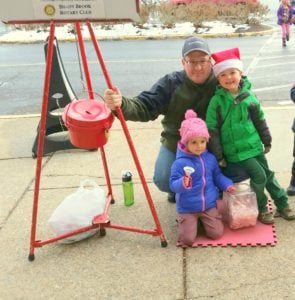 from trailers and then distributing them throughout the cemetery where a wreath will be laid on every grave this coming Saturday, December 16th as part of the national Wreaths Across America 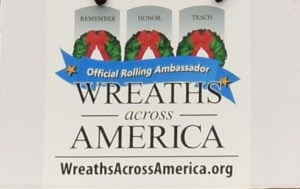 tribute to our veterans who are now interred in national cemeteries across the United States.

Afterward, Club members recognized former Shady Brook Rotarians, family members, and a former shipmate of one of our members. 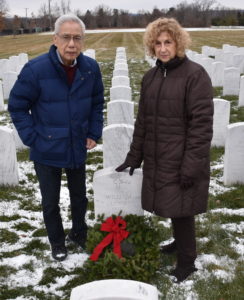 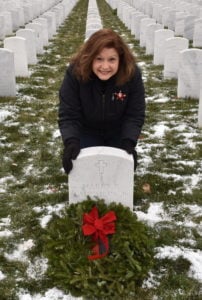 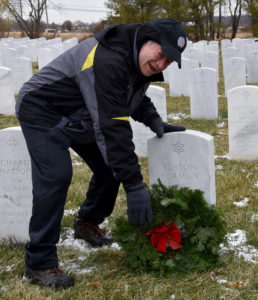 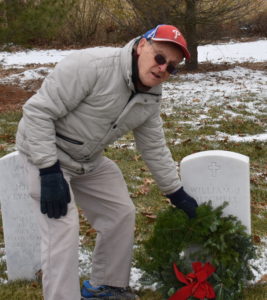 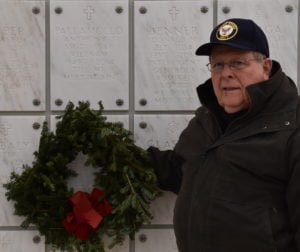 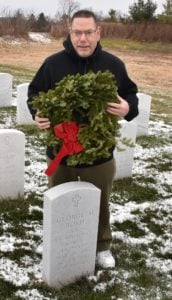 Friend and supporter of the Club Joe Rossi places a wreath on his father's grave – George H. Rossi