We had a another very successful to Hope Lodge visit to serve dinner to patienst and caregivers last night. 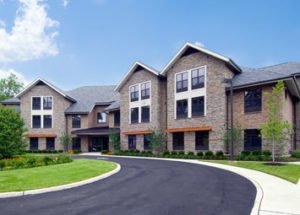 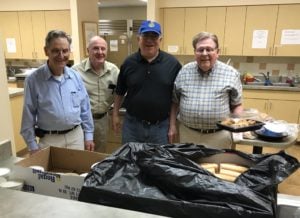 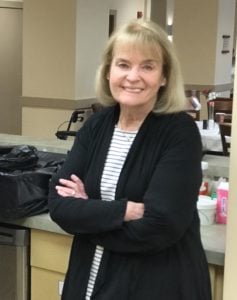 Again, Irv Perlstein ordered the food for the forty-odd people for dinner. 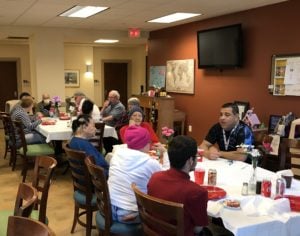 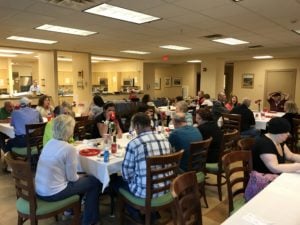 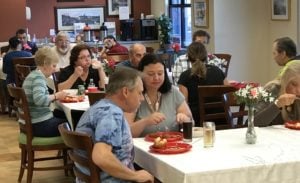 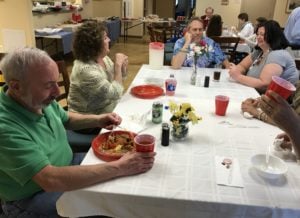 Syd sitting at a table of patients

Ed did his impressions of Hollywood stars in his always-popular Trivia contest. 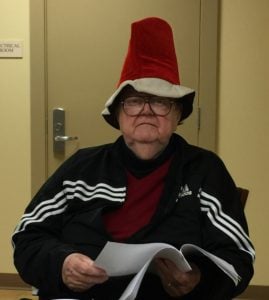 We gave out 25 one-dollar coins for those patients and caregivers who gave the first to correctly answer the movie from which the line read was taken. 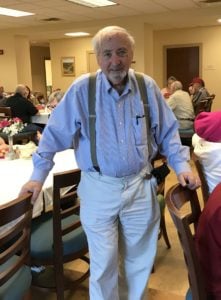 Fred (photgrapher for the evening) 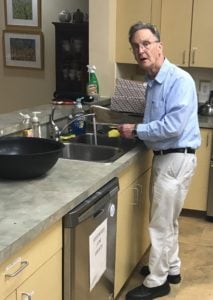 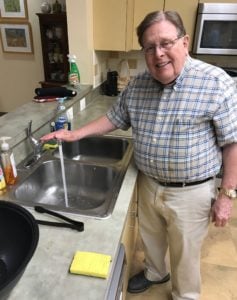 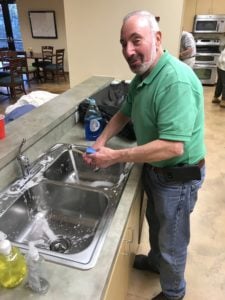 While a nuber of the patients and caregivers thanked us, we hope they sense the enromous satisfaction our memebrs received from brightening the lives of those battleing cancer.

Our next visit to Hope Lodge is scheduled for September 27th.

Maybe in the future there cancer will be conquored and there will not be a need for a centers such as Hope Lodge. 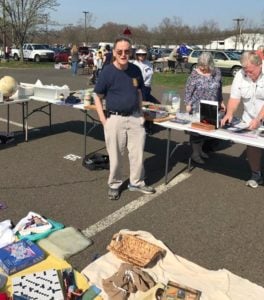 and their fight to find cures for blood cancers.

On October 8, 2016, many Club members and their families will be again participating in the annual

which will be held at Central Park, 452 Wells Road, Doylestown, PA

The Rotary Club of Shady Brook recently presented the 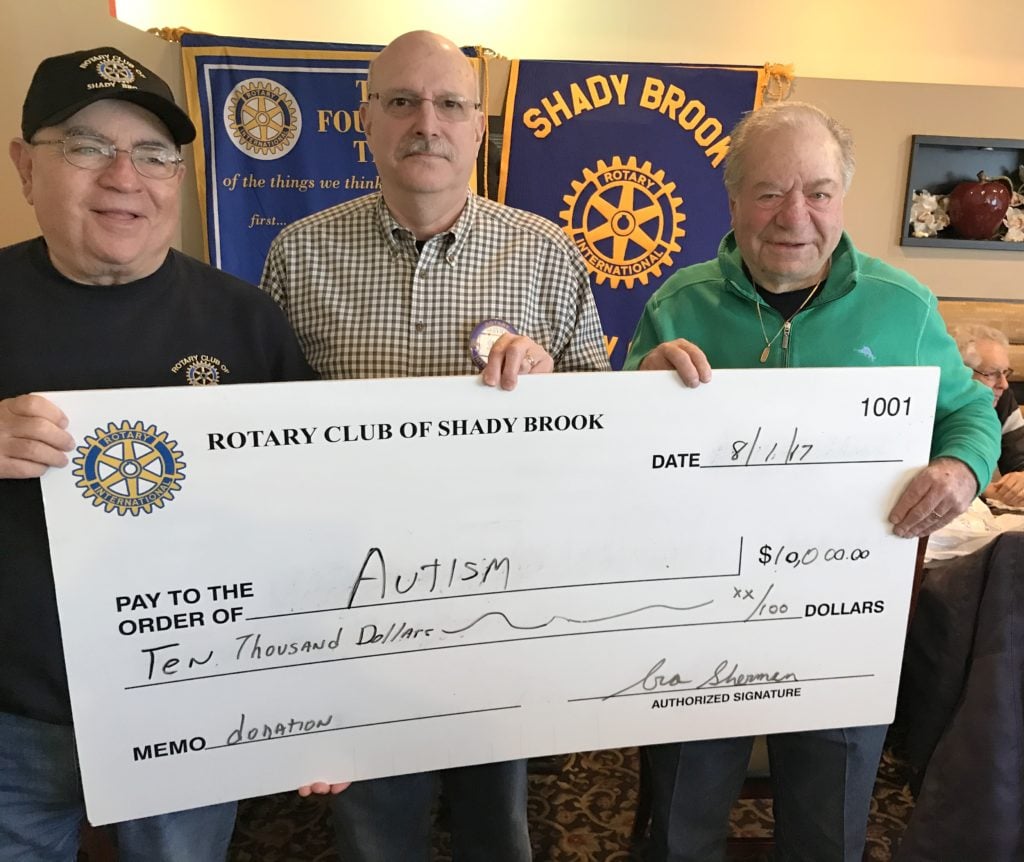 The funds represented the proceeds from the Club's 2017 Charity Golf Outing held at the Philmont Country Club and augmented several personal donations from Club members.

The Els for Autism Foundation was established in 2009 by Liezl and Ernie Els. The Els’ son, Ben, 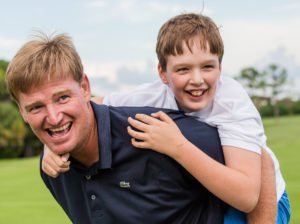 is impacted by the disorder which affects 1 in 68 children in the U.S. The world-class pro golfer and his wife have devoted their efforts to a game-changing, philanthropic project – The Els Center of Excellence.

The Els Center of Excellence is a world-class facility hosting leading-edge Programs and Services that are accessible to families and caregivers around the world. Based in Jupiter, Florida, the 26-acre campus provides on-site education for 300 students, ages 3 through 21. With all the essential components on one campus, the facility is the perfect hub for a variety of global outreach activities. This ensures The Els Center of Excellence campus’ positive influence is felt far beyond the boundaries of its walls.  Once the campus is completed, the impact will be magnified!

The Club was delighted to again demonstrate its support for

with Club president Ira Sherman and event Chair Jerry Redington presenting John Clough, a volunteer pilot for the service, with a check for $1,500 … proceeds from its Pancake Breakfast held at

in Newtown in early February. 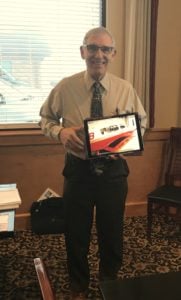 John updated his previous presentations to the Club, including photos of his single-engine aircraft, a 1995 Mooney Ovation, 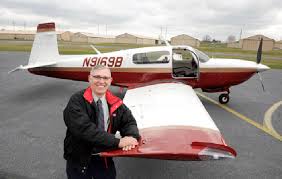 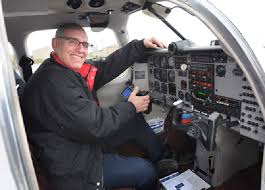 which he flies to distant medical facilities just about anywhere on the East Coast and sometimes beyond, through a nonprofit organization known as Angel Flight.

"My whole life is dedicated to serving people," Clough said. "Making people happy and helping them is the most important thing I do."

A New Holland resident and business owner, Clough flies with Angel Flight, which matches volunteer pilots who donate their time, aircraft and fuel to help people in need of medical care.

There is never a fee to the patient or the health care provider for an Angel Flight. These pilots provide their services on their own time and on their own dime.

Clough acknowledged it's an expensive way to volunteer.  He said, besides fuel, the costs associated with flying patients include insurance, airport fees and sometimes airplane rental or mortgage costs, if the pilot involved doesn't own the airplane.  It costs him approximately $250 for each hour of flying. His mission flights require an average of three hours.

"But I am glad I've been blessed with the resources to do it," he said.

Clough began flying nearly 40 years ago and has been a volunteer pilot with Angel Flight for the last 10 years.

The story of how he became a pilot and his passion for aviation is a "love at first flight" tale.  His second-grade teacher was married to a pilot who one day flew over the school playground during recess.  "We watched him go around and around, and it was the greatest thing. At that moment, I got hooked on planes for the rest of my life," he said.  Clough was 25 when he became a pilot.

Although he would much rather be taking to the skies, Clough keeps himself busy tending to his health-food wholesale distribution business, volunteering at community organizations and helping anyone who calls for help.

The people he meets through Angel Flight motivate him to keep going.

"Some need to go for weekly treatment at a facility in a different state," Clough said. "Sometimes, they need to get to a distant hospital quickly because an organ has become available for a transplant, and I'm there to make that happen."

"Besides … flying is fun," he chuckled.

Clough can transport up to three passengers at a time, and he makes it his goal to complete at least one Angel Flight mission a month.

A father of six and grandfather of seven, Clough takes mission calls at all hours, "It doesn't matter what time of the day it is. It's a way to make them feel more relaxed and comfortable knowing that someone on the other side of the line is willing to assist them."

The Club hopes to continue its support of John and the incredible organization he represents.