Scott Wallace, Democratic candidate for the Pennsylvania First District Congressional seat spoke this morning as part of of the Club's effort to meet all of the candidates running for State and Federal office. 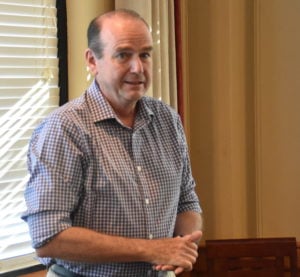 Scott Wallace provided an overview of his background as a Doylestown native, his schooling there, early jobs (including a stint at Burger King) he held before Haverford College and Villanova Law School.  With his law degree in hand, he went to Washington where he worked for the U.S. Senate’s Veteran’s Affairs Committees, helping to shape and draft legislation to provide increased care and benefits for veterans who were exposed to Agent Orange during the Vietnam War.  He then moved to working for the Senate Judiciary Committee under then chair, PA Senator Arlen Spector.His next stop was working for a non-profit helping to provide legal aid and defense for citizens and to advocate for Justice Department reform.

He then gave us a brief history lesson concerning his grandfather, Henry A. Wallace, who served as FDR’s vice president from 1941-1945.

With the passing of his parents, he and his siblings became managers of a family foundation.  He went on to explain that many of the charges leveled at him relative to the foundation were related to actions of another member of the foundation, actions with which Scott did not support and disavowed.  He restated his support for a Two-state solution to the Israeli-Palestinian conflict and his experiences in Israel and South Africa which he an d his wife have visited many times.

During his years in Washington and running a foundation, Scott is proud to have helped secure compensation for Vietnam Veterans exposed to Agent Orange, Enact the Innocence Protection Ace and Missing Children’s Act, Create college debt forgiveness for people in low paying public service jobs such as prosecutors and public defenders and fight to make the criminal justice system more effective, fairer and less wasteful.

He underlying message is “Today is no ordinary time”.  He is concerned by what he believes is a national sense of loss of its historic values, identity and international reputation.  Scott advocates a return to respect for the way people treat one another, the rule of law, an independent judiciary, and a free and independent press.   He laments the Administration’s “Fake News”, “Alternative Facts” and “The Truth is not the truth” rhetoric!

While he maintains he will not run a negative campaign, he did point out that his opponent, Brian Fitzpatrick, has voted 84% of the time in support of the Trump agenda.

Scott also will not accept any corporate or lobbyist monies and will match individual donations to support his run for Congress.

He is concerned that in a race which is anticipated to be one of the most highly contested, the aggregate costs for the candidates could run between $15 and $20 million dollars, which he believe is obscene.

Some of the positions he takes and things he will fight for if elected include:

During a question and answer session, he defended his personal actions (not those of other members with whom is adamantly disagrees) relative to his family foundation’s efforts in Israel, South Africa and other places, which have been criticized by his opponent.  Scott also admitted that his campaign has not been as effective a is needs to be to get his message out to the public.

Scott Wallace stated that he is solely committed to doing the right thing for the citizens of the District he hopes to represent.

He ended by simply asking for Club members and their guests to consider his candidacy based on his experience, beliefs, positions on issues which matter to residents of the District and his statements and not those of his opponent or his opponent’s supporters. 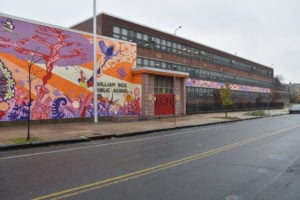 With the wonderful assistance of the teachers his car was unloaded in record time.

Unfortunately by the time all of the donated supplies were spirited into various storage areas we were unable to get any pictures.

Alan was taken aback by the number of times our Rotary Club was thanked by many teachers.  Principal Amy WIlliams remarked that our Club's annual donations are a real moral booster for the school … and that we are the only private outside group supporting the school.

Among the supplies provided are 50 cases of high-quality copy paper courtesy of Fred Edelman!  As the teachers typically given just one ream of paper each year, this donation is worth more than gold to both teachers and students!Marty Feinberg gave provided $50 to purcahse school supplies (350 good pencils, 25 notebooks and some crayons);

At the Club's first luncheon meeting is several years, 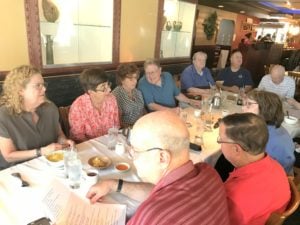 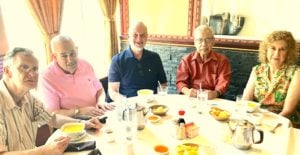 Diane Haines, from A Woman's Place joined us for lunch and to provide an update on her organizations which our Club has supported in the past. 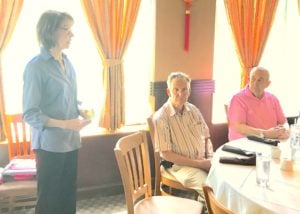 In 2000, Diane began as a volunteer with A Woman’s Place where she accompanied victims to court to get Protection From Abuse (PFA) orders. In April of 2001.  A Woman’s Place subsequently hired her as a part-time legal advocate.  DIane accompanied victim witnesses to district court for the criminal charges against their abusers that often occur with a domestic abuse incident.  She also helped victim’s at the PFA advocate office with legal options information.

The inception of the Civil Legal Representation program, the family law office of A Woman’s Place, began in the latter part of 2001. Two full-time attorneys and one full-time paralegal, which was me, were hired.  She has been the paralegal in this program for 17 years.  We help our clients in family court with civil legal needs, primarily custody, support, divorce, and PFA cases.

Today's luncheon was an education and provided a forum to address a future rundraising event for A Women's Place, scheduled for this fall after our charity golf outing in October.  To date, the Club has already raised $500 of its goal of $2,000 for the organizaiton. 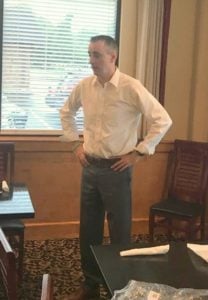 and a local resident running for re-election, spoke to the Club this morning.  He was an FBI for over ten years and headed the political corruption unit. inventor (3 patents so far), novelist, and IT database specialist/entrepreneur, is running for Governor on behalf of the Libertarian Party.  As he deftly explained, the Libertarian party supports your rights to manage your essential freedoms, “as long as you respect the rights of others”. It is the 3rd largest party in the United States and growing rapidly.

Brian is a staunch advocate of working across the aisle 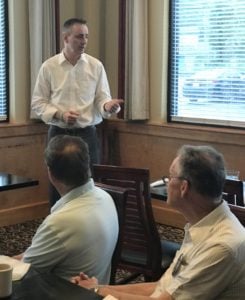 and stressed, “We need a return to an era of constructive bi-partisanship”.

His accomplishments and future plans include:

1. “Reform voting lines, get rid of gerrymandering and let citizen groups make the decisions to ensure parity and fairness. “

2. Break the Gridlock and Expand the Problem Solvers Caucus-“Currently, I am one of 45 congressional and gubernatorial members, who are introducing bi-partisan bills. Our most recent success was the passage of a bill three months ago that requires prescription dispensers to check existing prescriptions before approving a new prescription for opioids.

3. Campaign finance reform- He supports a cap on campaign spending, and would be very happy if he and his competitors could simply agree to, and follow, a cap.

4. Tackle the Opiod Crisis-“95% of the addicts start from a legal prescription for pain. “We need to get treatment for addicts and provide support to them. To prevent addiction, I am working hard within the Caucus to provide solutions. Required oversight monitoring of prescriptions is just the first step of measures we need to take as legislators. “

5. He co-sponsored the bill that provides protection for the DACA students, and successfully introduced a bill to further curtail cyber stalking (in part based on a request from a Bucks Co. family).

6. Demand equal treatment and services for those struggling with mental health issues—Mental health issues take an enormous toll on society as well as the families of sufferers. He wants insurance companies to expand their coverage of treatment, many policies only cover 50% of costs and all coverage stops after two years. More education about mental health conditions is needed; there remains a perception that many of the “mentally ill” are violent, which is untrue. However, what he sees is that often these illnesses that are NOT treated and that leads to other problems, such as alcoholism and drug abuse. 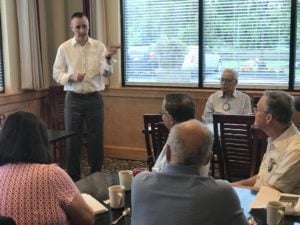 with members and guests asking pointed questions about Fitzpatrick’s views of some of President Trump’s policies. Brian supports our President, but vehemently disagrees with some of his policies, specifically in the areas of executive overreach (Russia investigation), environmental protection (he pushed for the firing of Scott Pruitt), and overly stringent immigration policies (separation of families, for example). He openly noted he did not vote for Trump as well.

When pressed even further, he noted that he was not “the Donald Trump response team” and that his first priority was to develop legislation working collaboratively and take efficient actions that would best serve his constituency.

Brian closed by stating that he has spent his entire adult life, not just as a politician, voting for individuals. He urged us to analyze, ask questions, and not just blindly vote the party line. “The only way we are going to solve problems efficiently is through inclusion of differing views, creative thinking, and reasonable compromise.” He thanked us all for the opportunity to serve.