The Club was delighted to welcome our District's 2019-20 Governor, Peter Mardinly.

Peter grew up in central Pennsylvania, attended Yale University.  After graduating from Yale, Peter attended Boston University School of Law, after which he was admitted to the Pennsylvania and Massachusetts bars in 1977.  He was additionally admitted to the Florida bar in 2002.  In 1981, he received his LL.M. in Taxation from Temple University School of Law.  He was admitted to practice before the U.S. Tax Court in 1978, the United States Court of Appeals for the Third Circuit in 1991, and the United States Supreme Court in 1995.

Peter has held many, many different roles within Rotary at both the club and district levels.

Peter emphasized his primary role was to support clubs like ours, “I work for you”, he emphasized. From his perspective, there were three important messages to members. First, we are all responsible for “growing Rotary”.  He shared that when he joined Rotary in 1981, there were 2,500 members in our District, there are now 1,310.  We discussed the club’s challenges with pursuing Rotaract and Interact options.  He encouraged us to reach out to friends and colleagues we meet who would make good members.  As we had discussed often, he believes clubs with vibrant service projects attract potential members.

Peter’s second message concerned money … making sure we get our fair share not only from the district, when grants are awarded each May but also from Global, which can award grants at any time during the year.  He acknowledged that the required grant training was sometimes a challenge.  Jeff noted that he would be attending this year’s session.  Peter clarified that the IRS and federal government required the training, it was not something imposed by the state or district Rotary.  He explained that the District and state had relationships with many entities and that they have funded projects in Canada, Bermuda, and France, as well as distance counties.

He asked us to “think Big” and not to worry too much about finding a partner, concentrate on the service need, the ideas. His last message was he felt that the way Rotary would flourish in the next century was if we worked even more closely with other countries and each other. He thinks sometimes technologies has “broken us into smaller tribes” and the power of Rotary is when big goals are tackled by diverse groups of members.

Peter announced that they were doing something different this year and holding the District Conference on May 16 at the Elmond Park Zoo in Morristown; he hopes a couple of us will attend. He reminded us of the upcoming Rotary Leadership Institute on October 19. Jeff assured him he plans to attend.

Peter was happy to award Irv Perlstein and Dick Newbert a very special Governor’s Citation for their outstanding service to Rotary. 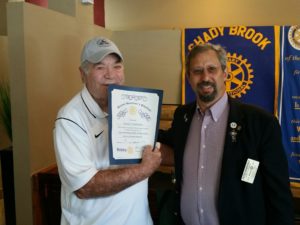 As Dick is on the road, he will be presented his award upon his return. Jeff and the entire club also thanked Irv and Dick for their terrific hard work on behalf of the club and its causes.

Peter received an enthusiastic round of applause on his presentation and related handouts.  He stayed after the meeting, fielding questions, too.

This is the 10th anniversary of Fox Chase Hope Lodge, sponsored by AstraZeneca. There are 30 lodges across the county that patients and families can use while undergoing cancer-related treatments. Over 1.7 million Americans are projected to be diagnosed with cancer this year alone, so these lodges are heavily used. She thanked us enormously for our 7+ years of support. Ms. Gill stressed how important the dinners we host are to the patients. They hope to raise $600,000 to completely renovate the kitchen/dining area of the lodge next summer.

In preparing for the renovation, Ms. Gill asked us for our suggestions. Fred suggested that one of the rooms in the lodge be designated as a private dining room, so smaller, confidential family gatherings could be held. Alan recommended another refrigerator is sorely needed. There is never enough room for us to store our “leftovers” from the dinner, given all the items already in the current refrigeration units. Dolly also noted that she witnessed an unfortunate incident that she hoped Ms. Gill could remedy. She had met a caregiver for someone who had passed away at the lodge that day. Apparently, the policy is to not allow the caretaker/family member to stay in the room after the patient dies. Dolly suggested that at the very least, there should be leniency the first 48 hours, until travel/other lodging arrangements can be made. Ms. Gill promised  they would seriously consider our suggestions.

We asked her for suggestions of things we could do differently. For a change, she suggested we consider offering soup as a menu option. A number of patients have difficulty chewing or managing heavier foods. We agreed to look into this option for future dinners.

She closed by thanking us again for hosting dinners and noted that they are also always looking for volunteers to transport patients, if any of our members are interested in that service.

Ms. Gill received a big round of applause for her presentation and related handout.