We were pleased to host Skylar Hurwitz to this morning's breakfast meeting.  Skylar is a candidate in the April 28th  primary election for the Democratic nomination for Congress. 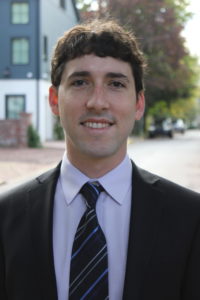 A 2014 graduate of American University, Skylar and his wife are local residents with strong family ties to this area.  Skylar is a technology consultant and environmentalist born and raised in Bucks County, Pennsylvania. He split his youth equally between Yardley and New Hope-Solebury, worked in Washington, DC for nearly a decade, and has been running a small business in his hometown since 2018. His time in DC provided key insights into what is broken in Washington – and what must be done to fix the government so it starts working for everyday Americans again.

Skylar gained experience working directly on Capitol Hill briefly serving in the office of Congresswoman Carolyn B. Maloney of New York and working on a SunShot initiative grant at the National Association of Regional Councils that focused on lowering the bureaucratic costs of solar installations.  Skylar then spent nearly three years managing a $30 million grant portfolio and doing extensive international travel for Conservation International in Arlington, Virginia. The program protected the most vulnerable biodiverse regions on Earth by building the capacity of locals in those countries to manage problems self-sufficiently.

Hurwitz has had professional experiences working in Italy, Cambodia, Vietnam, and Ghana. With an academic background in Global Strategy and Environmental Policy/Studies, one of Hurwitz’s key interests is in finding alternative energies and reducing our carbon footprint. Solar currently represents only 2% of the U.S. expenditures on energy. Having worked at a solar energy company and studied the cost-benefit of its use in other countries, Hurwitz is a strong advocate for its broad implementation in the U.S. He would like the government to invest in the panels for all families and provided incentives to companies who convert to solar power. Hurwitz promised to work collaboratively on critical climate change issues.

Hurwitz is a proponent for universal health care. He believes if we all have such coverage, we could really leverage our power to force drug companies to lower their costs to reasonable levels (citing unfair insulin increases as an example of current gouging). He has worked with international nonprofits, helping them create metrics and track their successes, as well as working with them to secure grants.

Hurwitz is a proponent for Fair Tax reform, including a higher annual payroll tax on those families making more than $250,000 per person ($500, 000 per couple). He would use the resulting revenues to expand Medicare coverage to include vision, dental, hearing aids, and home health care coverage.

While he is a Democrat, he promised he would work for us all and across the aisle. He considers himself an Independent Democrat. Hurwitz encouraged us to vote, get involved, be “part of the change” and asked for our support. He stayed after the meeting and several members signed his email support list.

At its annual supporter recognition dinner this evening, the Philadelphia area Leukemia and Lymphoma Society the Rotary Cub of Shady Brook was presented with the No. 2 Top Corporate Team award for it's 2019 Light the Night Walk held at Central Park in Doylestown.

During the ceremony, pictures taken at last fall's walk were shown, in which a number of Club members were spotted.

This past year, the Club raised $10,700 for the Society … through participation in the Walk and from several flea markets members attended from which 100% of the monies collected were dedicated to this cuase.

It is noteworthy that ours is the only Rotary Club actively involved with theLeukemia & Lymphoma Society; in part as blood cancers have taken a terrible toll on current and past members, close friends and members of our families.

Representing the Club and receiving the award were 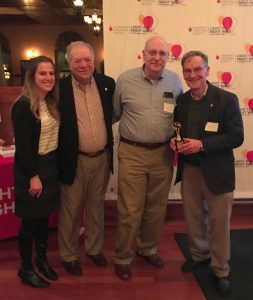 Darby Laurence and Sadie Wiley, community-minded eighth-graders at Maple Point Middle School, were named the Rotary Club of Shady Brook's Student of the Month for December 2019 and January 2020, respectively.

Each received a $100 scholarship for their volunteerism and community service and were selected by the club in consultation with the school's teachers and guidance counselors. The students and their families were recognized recently at an awards dinner at Bella Tori at the Mansion in Langhorne. 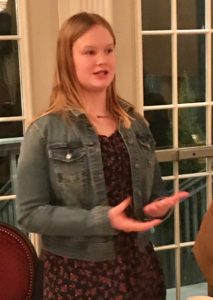 Darby, a Girl Scout, is working toward her Silver Award. Her project involves assembling first aid kits for pets, including pamphlets with tips to treat minor injuries, potentially reducing the need for time-consuming trips to the vet.

A member of the National Junior Honor Society, Darby is a student-teacher for dance for four-year-olds at Galaxy Dance and Fitness in Levittown, and also sings in the Maple Point school choir. The Laurences live in Hulmeville. 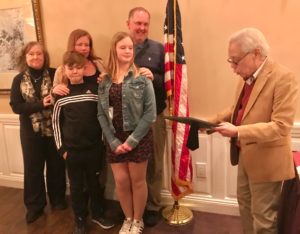 Sadie, too, is a member of the National Junior Honor Society. 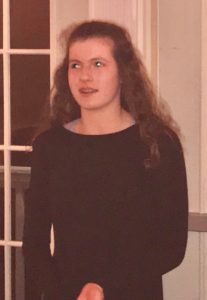 Her activities include cheerleading at the United Dream Elite All-Stars, and making baby blankets for preemies.  She and her entire family happily participate in Toys for Tots drives. The Wileys live in Langhorne. 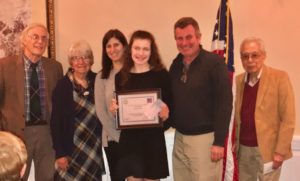 Anil Srivatsa and his wife gave a very inspirational talk about the importance of organ donation, misconceptions about the process, and how we can take action within our own lives.

An accomplished business person, Anil’s life changed suddenly six years ago when his brother, a 47-year old neurosurgeon, asked him if he would give him a kidney. Without hesitation, he said yes. He then found the experience changed his life. First, like many of us, he learned that there are many misconceptions about organ donation. He had assumed his life would be diminished after surgery. He was fearful about the surgery, but decided it was the only thing to do. While there is a very small risk with any surgery, he not only has no after effects from it but feels “even healthier and stronger”. Anil asked he do one operation a month for a person who could not pay; his brother promised to do three!

Anil also discovered that over a million adults are waiting for kidneys, so the need is critical. Once tied to a dialysis machine, one in five will die within five years. Once his brother resumed his professional, he asked Anil how he could ever repay him. Armed with this knowledge and the impact his gift had made, Anil decided he needed “to be the change” and devote much of his life to educating others about the importance of donation.

For the last five years, he and his wife have traveled all over the world, sharing their stories and those of other donors. They sleep and travel in their RV. They have visited over 43 countries (Russia being the “hardest to get out of”) and talked face-to-face with over 75,000 people. He also participates in marathons and the worldwide Olympics for Donors/Recipients. This event, set for Houston this year, showcases the talents and determination of thousands of individuals whose lives have been lengthened by participating in donation.

He asked us to not only to spread the word about the importance of donation but to make it clear to our beloveds that we wished “all of our parts” be made available “post life”. Some asked why we had to discuss this if our wishes on our driver’s license was clear. He noted sometimes in some states and entire countries it is NOT enough. In the sorrow, some families recoil and may not be willing to sign off on the procedure(s). They may think you meant only organ donation, not more. He explained how half of all severely visually impaired/blind individuals are under the age of 6 and stressed the importance of eye, skin, and bone donations. It is critical, “while you can”, to be clear in what you what done or not done with your body after death. It literally could change the lives of many others.

Anil and his wife have two children who live in the U.S. Six months of the year, he works full-time for the Gift of Life on the road and runs a business in India the other six months. His brother continues to perform surgeries in India. His goal is to speak to over a million individuals and “we are clearly on our way”. He lauded us for our community service and urged us to “spread the word” about the benefits of donation. 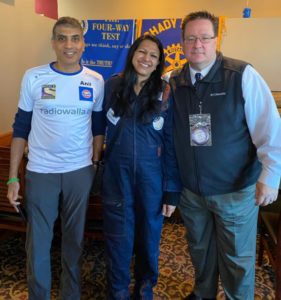 Anil and his wife received a huge round of applause. Only in passing did he note that he and his wife relied on donations for their gas money; quite a few members donated as they left the meeting.

We were privleged to have Bob von Bargen (President Enerrrritus) and Glenn Hyman (Managing Director and Vice President for Major GIfts) from the Armed Forces Heritage Museum attend our meeting this morning. 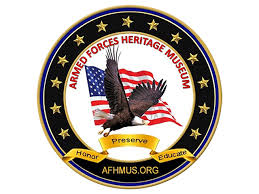 After breakfast, they shared with a fascinating presitation on the Armed Forces Heritage Museum, a new mobile and virtual military museum for New Jersey. 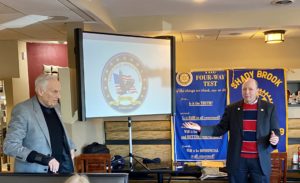 Its charitable and educational mission is being operated, is to “preserve, interpret, exhibit, and educate all on the rich history, artistry, heritage, and environment of the armed forces on Joint Base McGuire-Dix-Lakehurst”.  The organization is currently in the process of releasing a traveling, educational and multi media 30 foot display trailer which will tell the military history of New Jersey and surrounding regions. 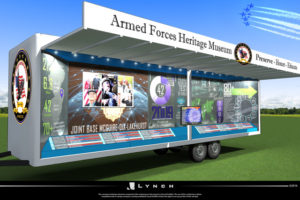