We were honored to be joined by Andy Meehan, Republican Candidate for US Congress, opposing incumbent Brian Fitzpatrick in the April 28th primary election.

A long-time local resident, Andy and his wife and two sons currently live in Holland. He grew up in NE Philly and has also resided in Bucks County for many years. He’s been a certified financial advisor for over 20 years. This is the first time Andy has run for office. He is running for Congress because he feels that Brian Fitzpatrick does not adequately support President Trump nor does he reflect “traditional American Republican” values.

Andy is a proponent of much smaller government and greater fiscal responsibility and accountability. He said that the first thing he would do if elected to Congress is to propose a ball that would prevent anyone who is biologically a male from participating in women’s sports teams in areas such as their locker rooms and changing areas. There is currently an Equality Act proposal, which his opponent Brian Fitzpatrick supports, which would allow transgender females (biologically male) to participate on female team, including their changing areas. Club members asked him questions related to his proposal, some were supportive of it while others supported completely equal treatment regardless of biological gender. 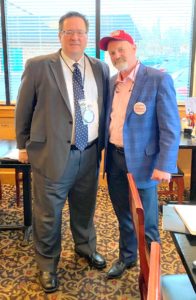 Like our speaker last week, Andy needs a petition signed by 1,000 resident Republicans to qualify for the ballot on the April 28th election.  Andy received a round of applause for his presentation and stayed afterwards to collect signatures. 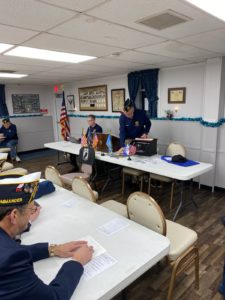 about our Rotary Club, the many initiatives it supports and the Club;s long-standing relationship with the Post.  For several years, Jesse Soby has provided a conduit to distribute the Gift Certificates purchased during the run-up to Thanksgiving and Christmas to provide holiday meals for area veterans who have fallen on challenging econoic times and their families.  Members of the Post have also supported participated in the Club's charity golf outings.

Both Irv and Post Commander Bob Osterhout reinforced their mutual appreciationfor  and and benefits accuring from the relationship between their organizaitons.