This morning we were honored to host Fraank Farry, the Republican candidate for the 142nd Pennsylvania State House seat. 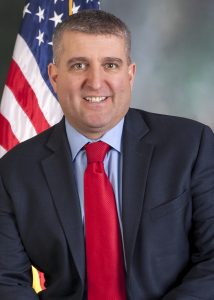 Representative Frank Farry was first elected to serve the people of the 142nd Legislative District in 2008.

During the 2019-20 session, he has been appointed to serve on the House Consumer Affairs where he chairs the Subcommittee on Telecommunications, Gaming Oversight, chairs the Committee On Ethics, along with the House Veterans Affairs and Emergency Preparedness Committee, where he continues to chair the Sub-Committee on Security and Emergency Response Readiness. In addition, Frank serves as a House Republican Deputy Whip and chairman of the House Firefighters and Emergency Services Caucus.

Over the course of his legislative career, he has been successful in advancing legislation to designate cancer as an occupational disease for firefighters, offering protection to both career and volunteer firefighters who develop cancer as a result of their service. Farry has advanced legislation establishing the Safe2Say Program which provides methods of anonymous reporting concerning unsafe or potentially harmful criminal activities in schools or to individuals. He has also authored legislation to save taxpayer dollars by allowing counties that operate their own criminal laboratory to receive the money generated by the criminal laboratory user fee imposed on guilty defendants within that county. Additionally, he championed public safety measures to require carbon monoxide alarms in multi-family dwellings and prevent minors from the dangers of indoor tanning.

Farry has been recognized by medical organizations, child advocacy groups, drug and alcohol safety councils, and small business organizations for his advocacy efforts. He was received the James Baird Award from the Firemen’s Legislative Federation of Pennsylvania, which is presented to a legislator who has demonstrated outstanding support on behalf of Pennsylvania emergency services. Additionally, the Jesse W. Soby, American Legion Post No. 148 presented Farry with an award for his dedicated service to the community and state.

In addition to his professional endeavors, Farry is also very active in his community, serving as a volunteer firefighter with the Langhorne-Middletown Fire Company since June 1990 and as chief of the organization since January 2001. He currently serves on the board of trustees for Bucks County Community College, is a past board member of the Middletown Community Foundation and the Lower Bucks Chapter of the American Red Cross, past president of the Bucks County Consortium of Municipalities, and has served on numerous township and county boards and commissions.

Before being elected to serve the people of the 142nd District, Farry served as assistant township manager and director of community services for Middletown Township from October 2000 to June 2008. He also worked as a legal intern in the U.S. Department of Justice.

Farry currently resides in Langhorne with his wife and two children, where he is an attorney at the law firm of Begley, Carlin & Mandio.

In describing today's political landscape, he believes it is the most chaotic he’s ever seen and that voter opinions are hardened to the point most refuse to even listen to the “other” side.

It does not support the “voting integrity panel legislation state Republicans are pushing in Harrisburg.

Frank mentioned that the first batch of requested Mail-in ballots were being mailed today (October 7th).

Middletown has not been immune from COVID-19, as he lost count when over 700 cases had been reported.  Sadly, he noted, that the pandemic is REAL and that two country fire department employees had died from the virus.

The challenges the public and government of the commonwealth has faced during the past eight months fall into three major categories:

Too often, he bemoans, “Politics has won the day with respect to the pandemic” and it is “despicable!”

Frank discussed the legislation passed in December 2019 permitting mail-in balloting, while acknowledging its challenges and the mis-information being circulated about potential fraud, mostly coming from the Administration.

Frank mentioned he has sponsored or co-sponsored 27 bills which have been passed into law, including closing loopholes in Meagan’s Law, job-related care for fire fighters and defining COVID as a potential cause of such job-related infections.

He believes in wearing masks and believes they are a major source of protection from COVID-19 at least until vaccines are available.   He mentioned that Woods Services of Langhorne has stepped up to help make masks … from American-made textiles (which were a challenge to acquire).

As for reducing the size of the state legislature, he is not overly optimistic, although he voted in favor of such a move.  However, he is concerned that the advertised savings will not be anywhere near as large as some proponents have suggested.

Frank has worked with Fair Districts PA to eliminate the problems stemming from gerrymandering.  At the same time, he worries that political influence will continue to dominate the process.

With the exception of the most violent of crimes, he favors judicial discretion in sentencing.

He thinks that having elected judges in “Nuts!”.  He would rather see the governor nominate judges which would then need to be approved by the State Senate.

Frank talked about the state’s backstop legislation to assist people in the event the U.S. Supreme Court rules the Affordable Care Act in unconstitutional, protecting those with pre-existing conditions.  When asked if the legislation would also prevent health insurance companies from reinstating lifetime caps on insurance, he did not recall but would find out and get back to us.  His office called to day and is looking into the matter.