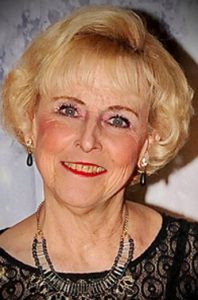 joined our vitrual meeting this morning.

While many of our members had heaard about the Foundation, few had any substantive knowledge about its misison and how relatively easy grants which fall withing their guidelines can be obtained in support of certain club programs. 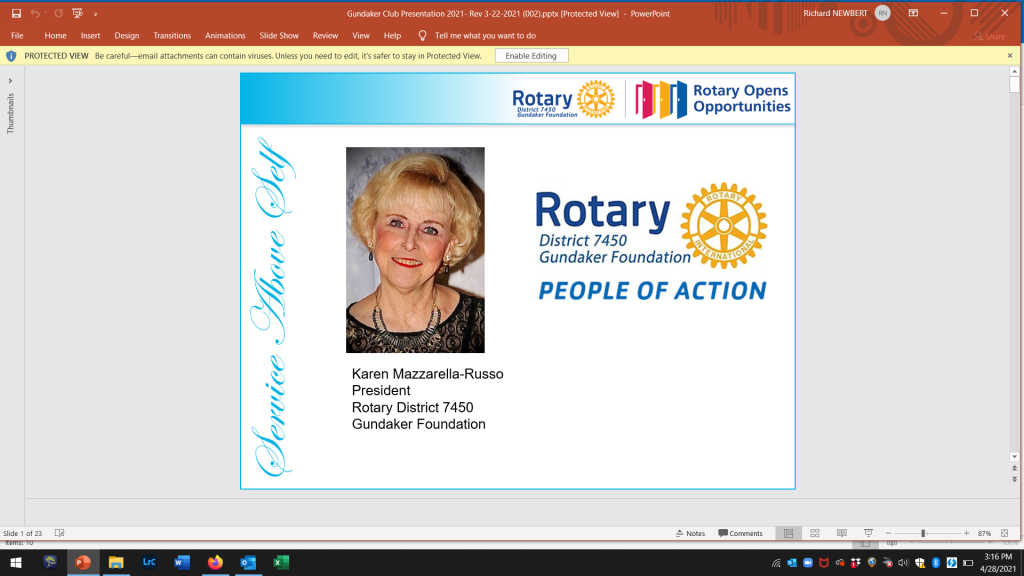 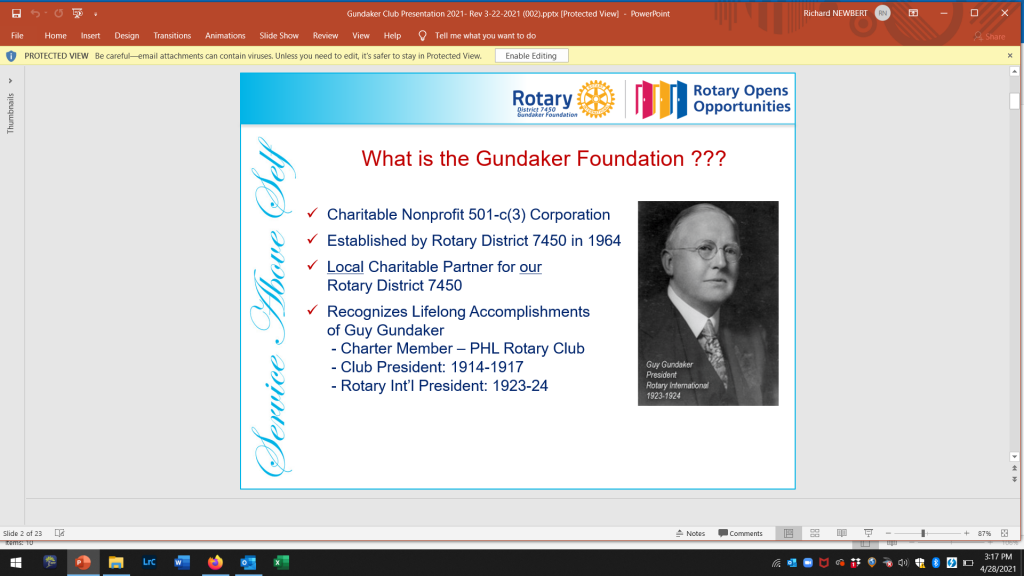 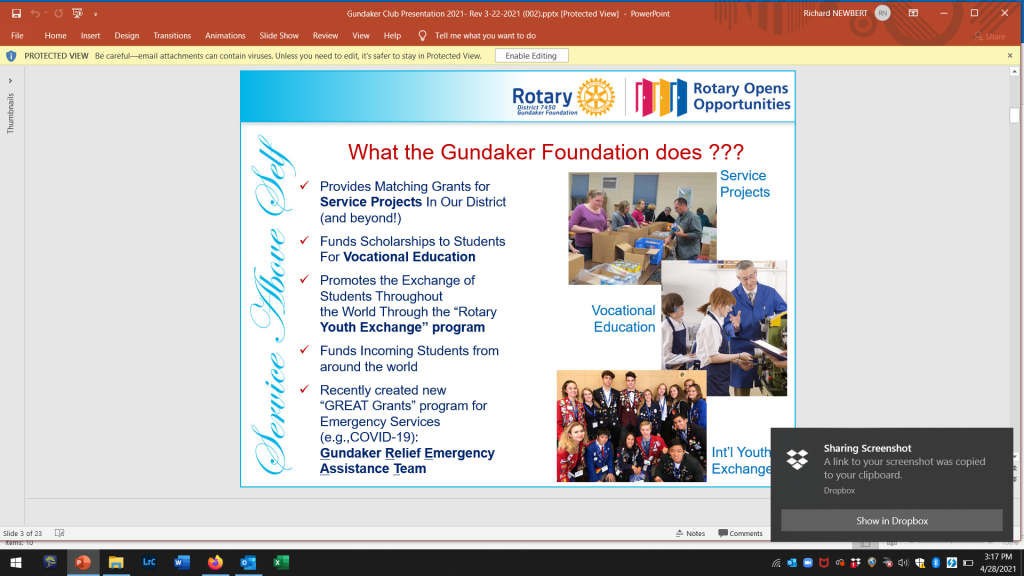 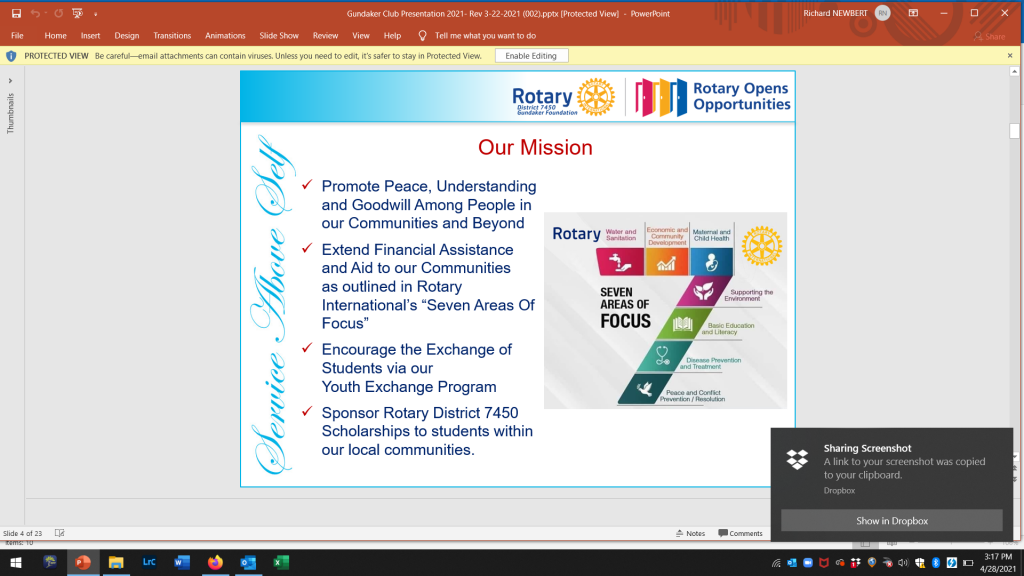 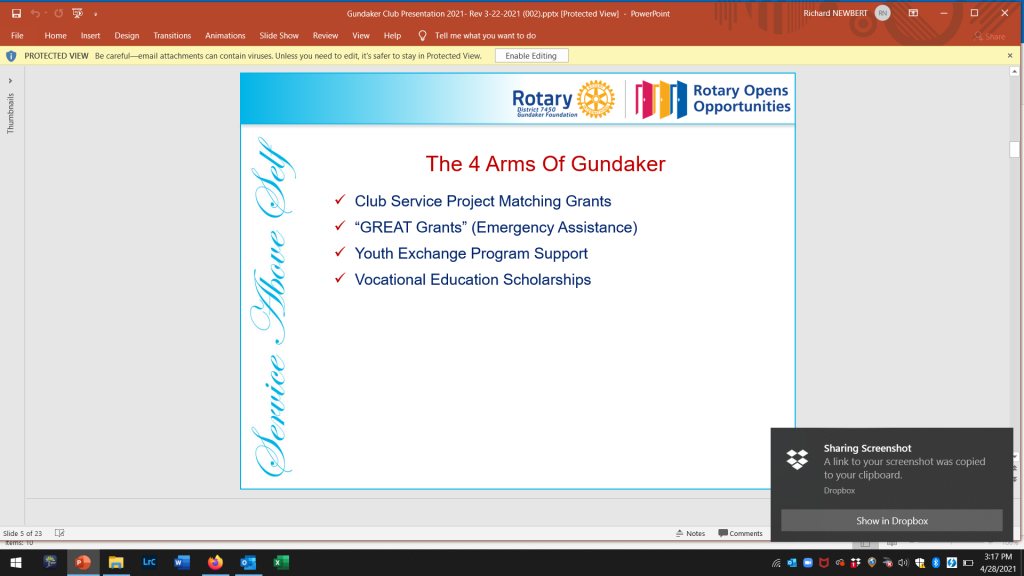 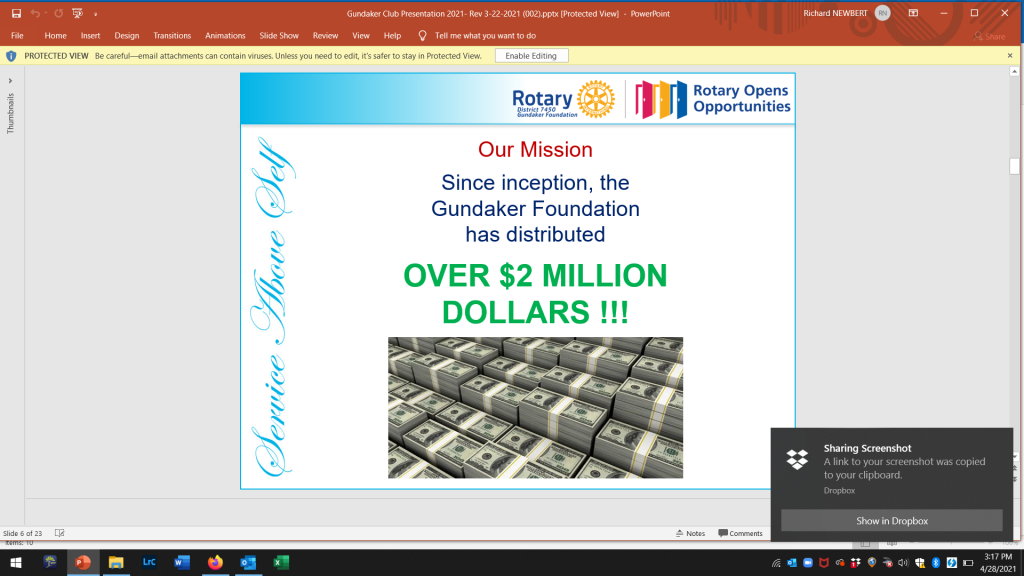 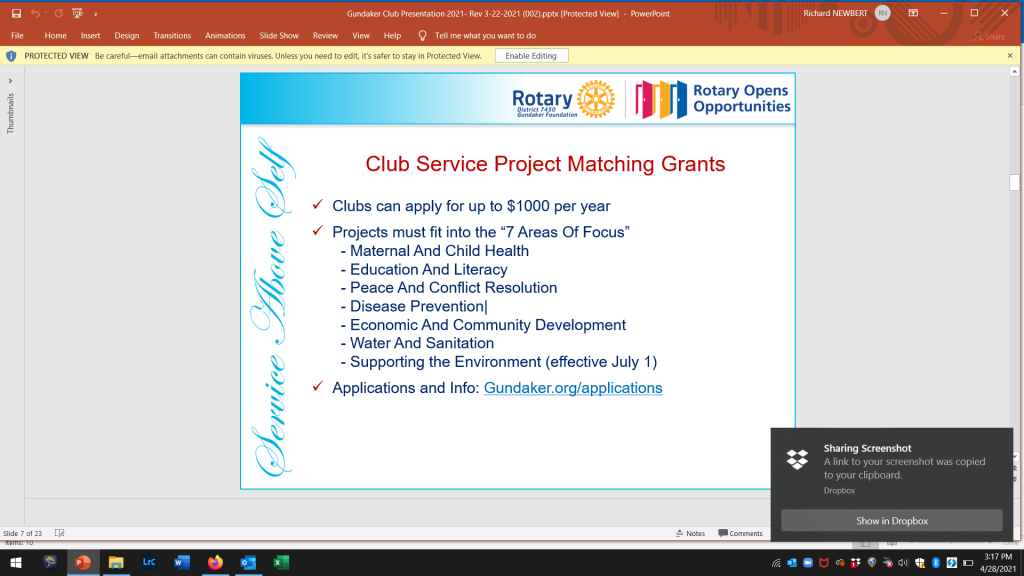 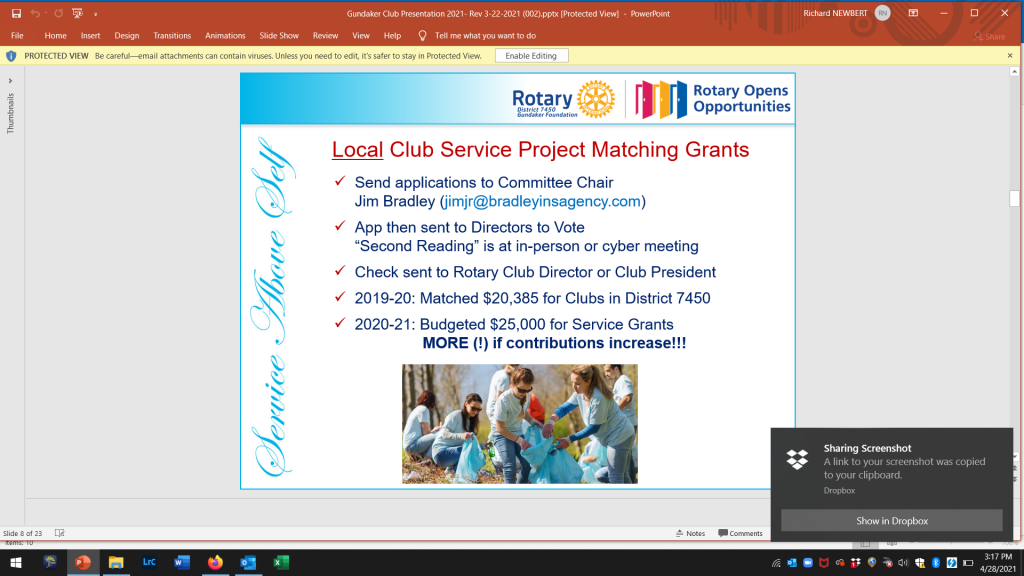 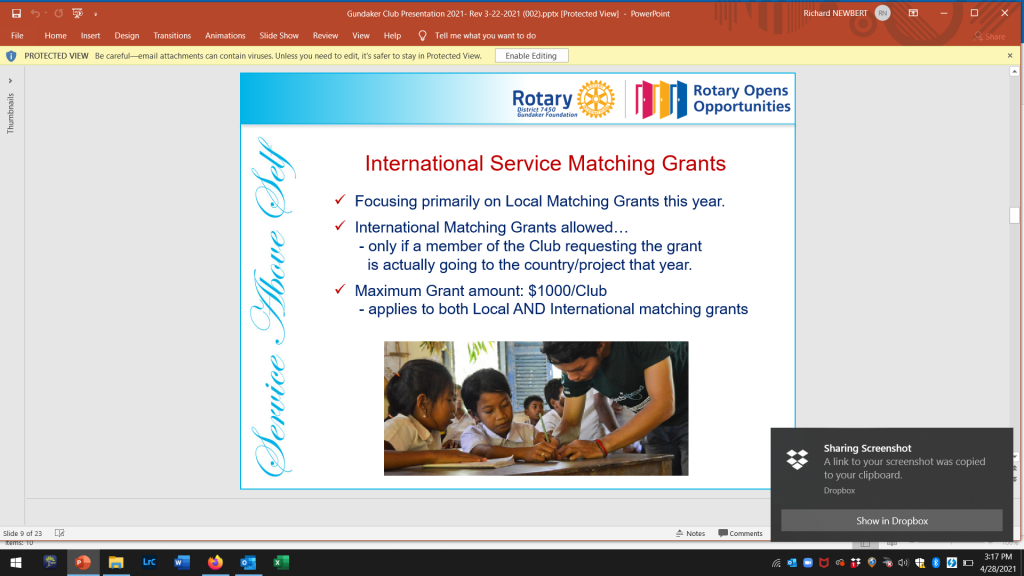 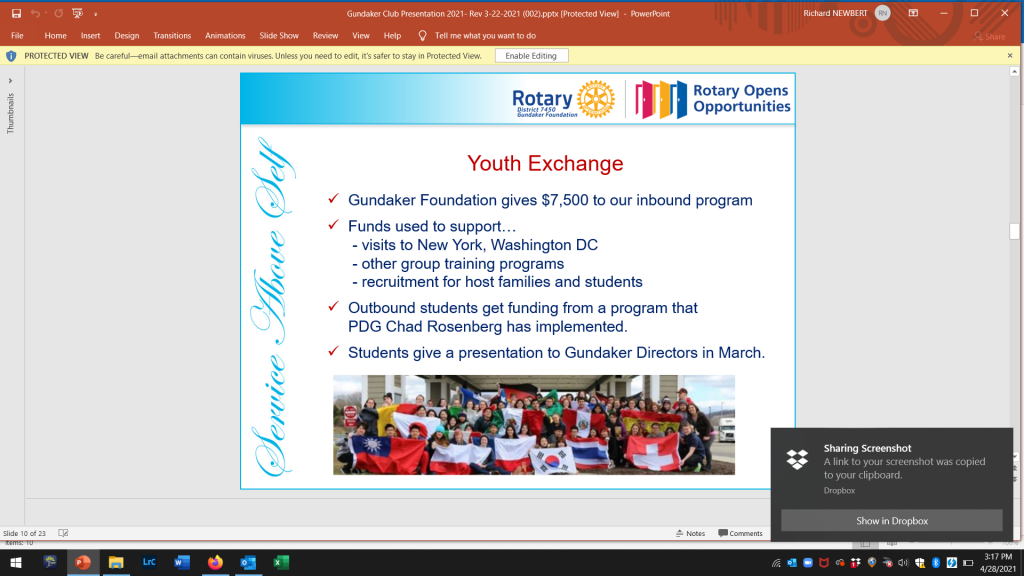 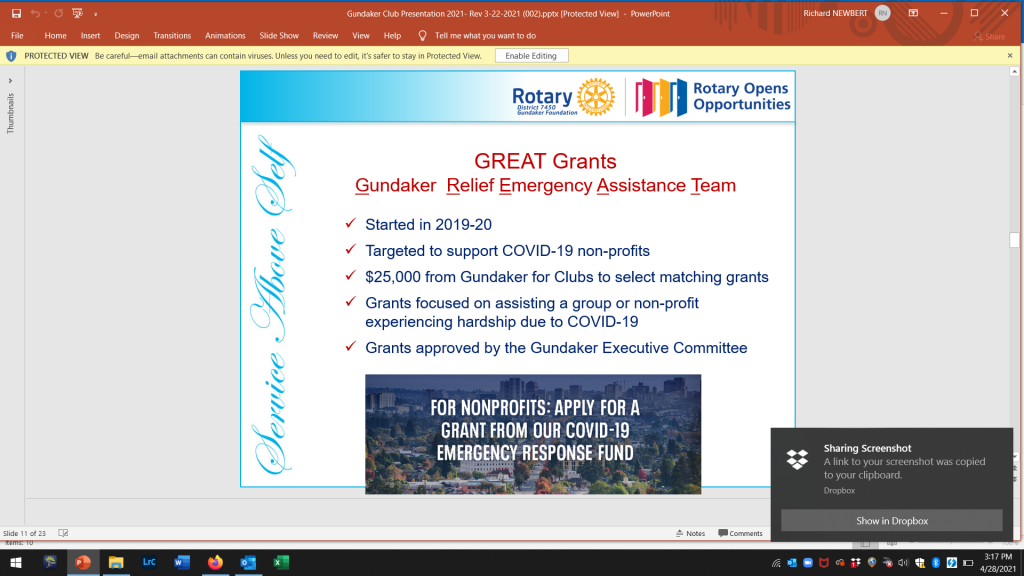 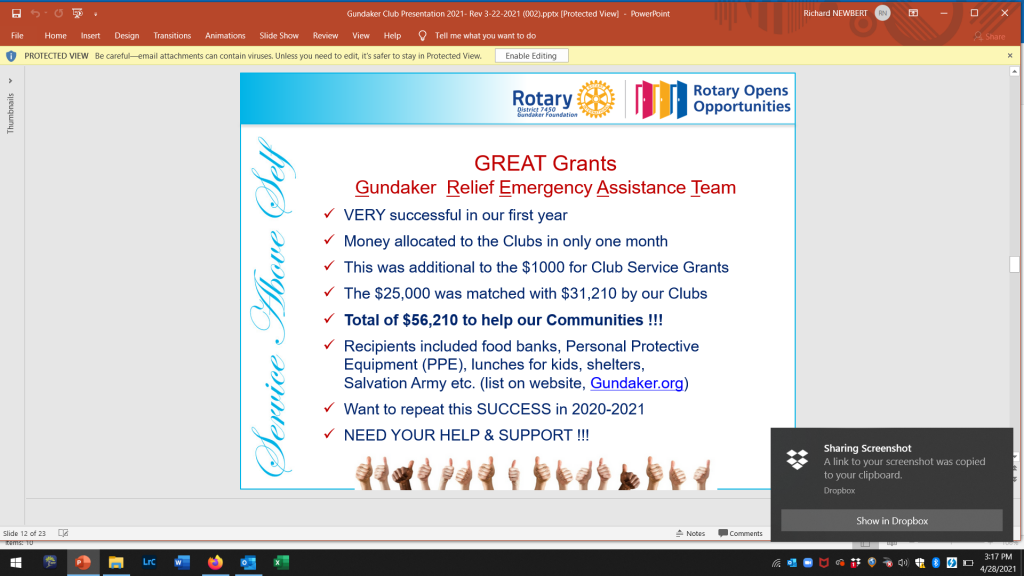 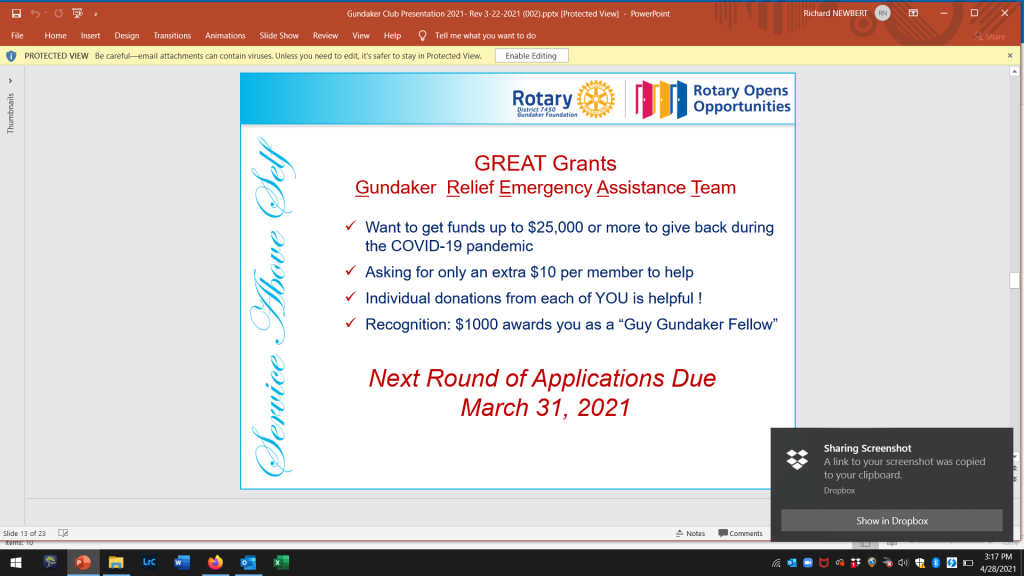 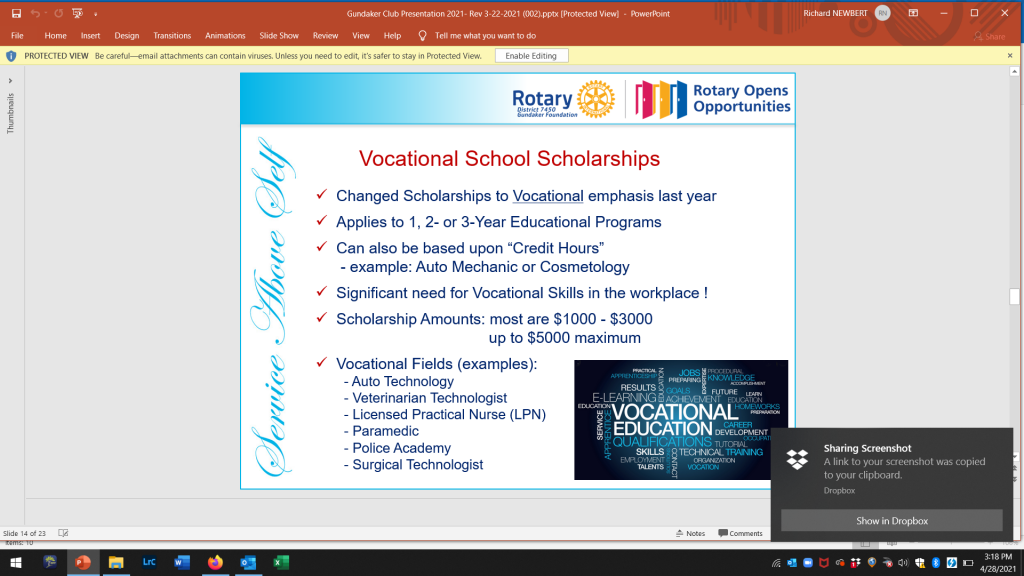 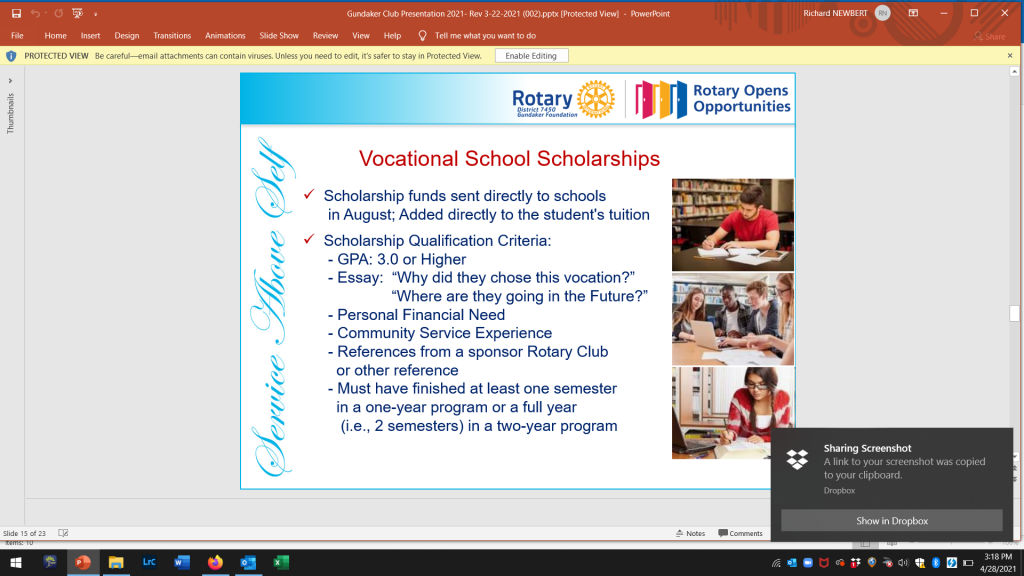 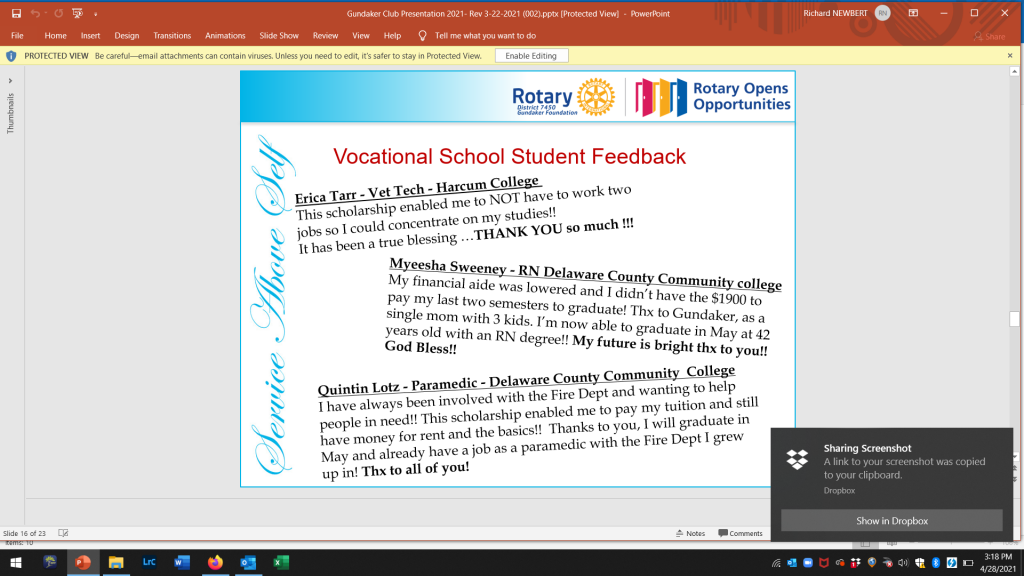 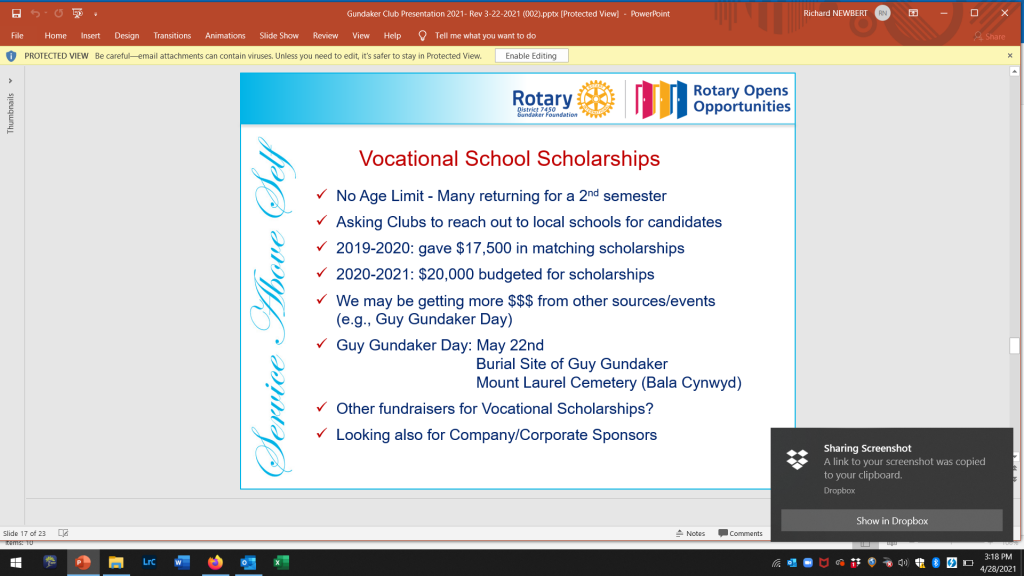 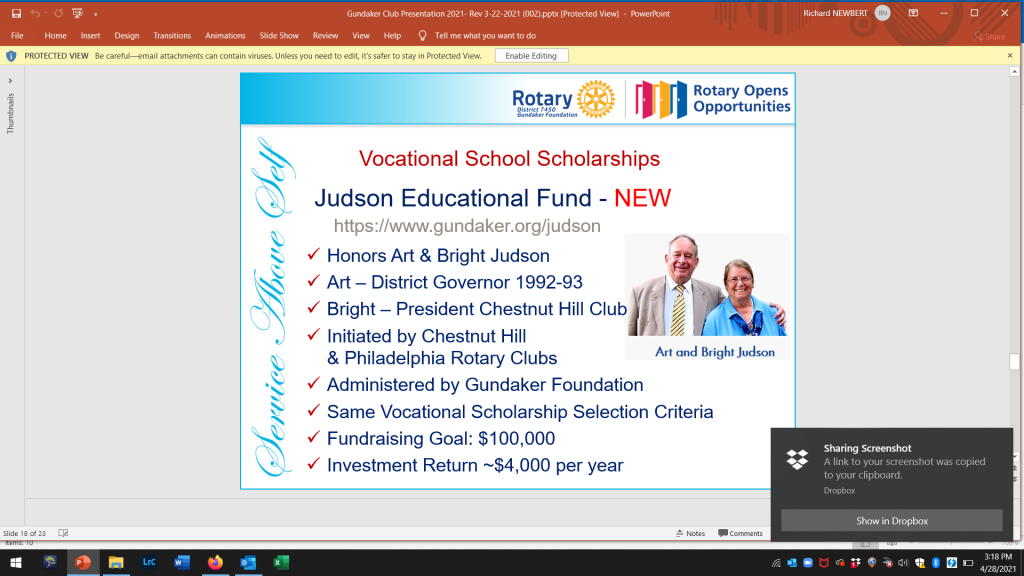 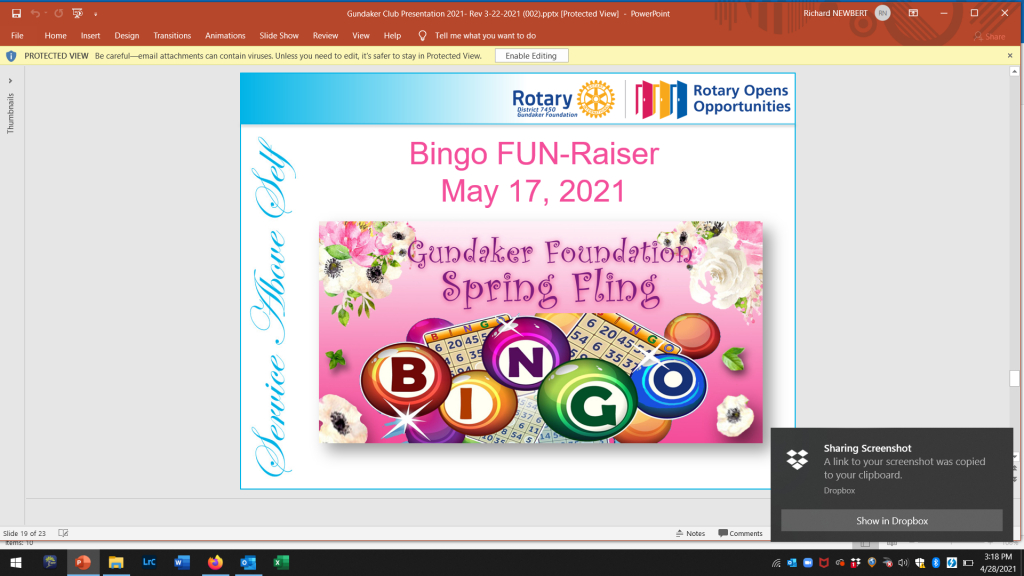 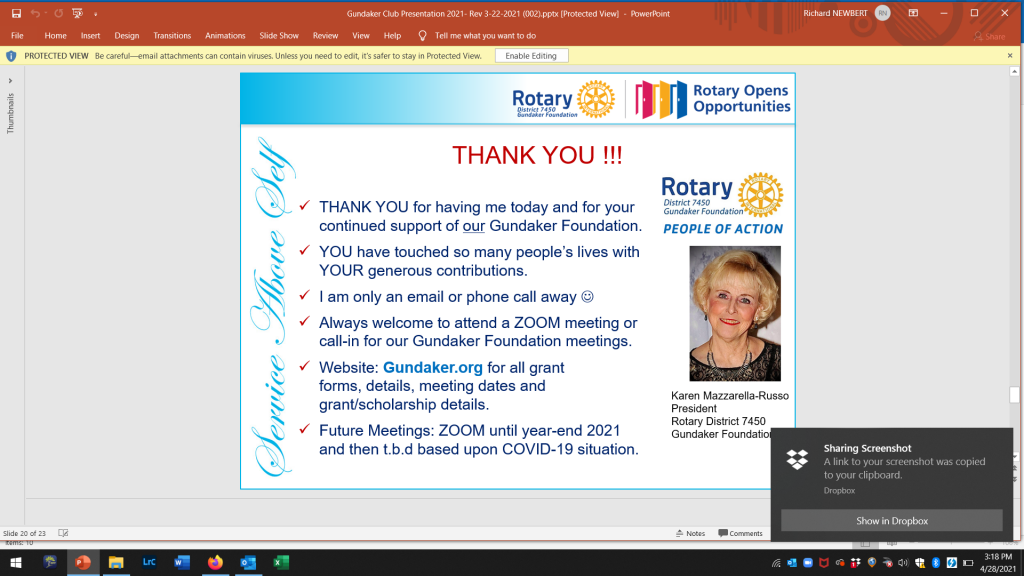 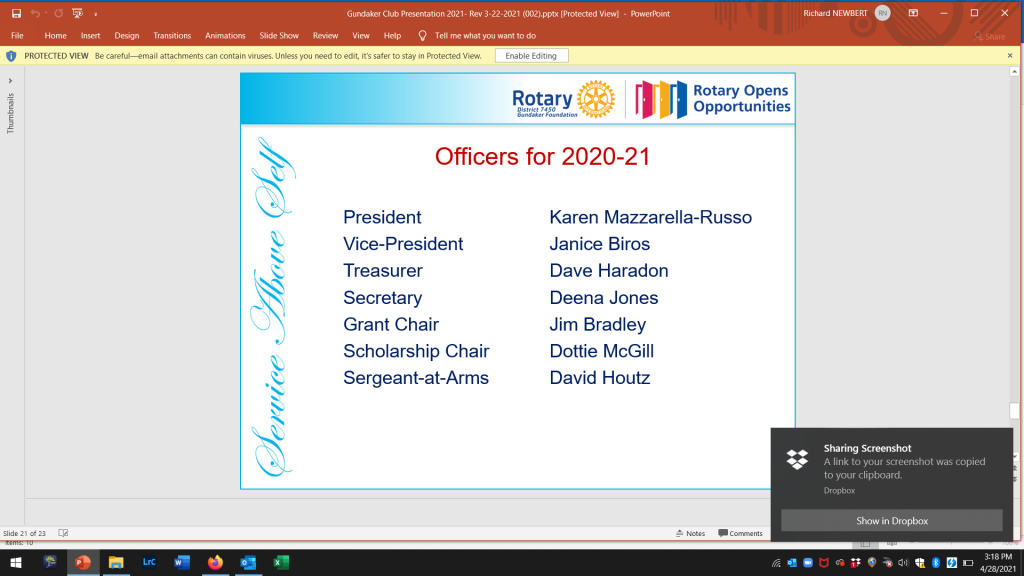 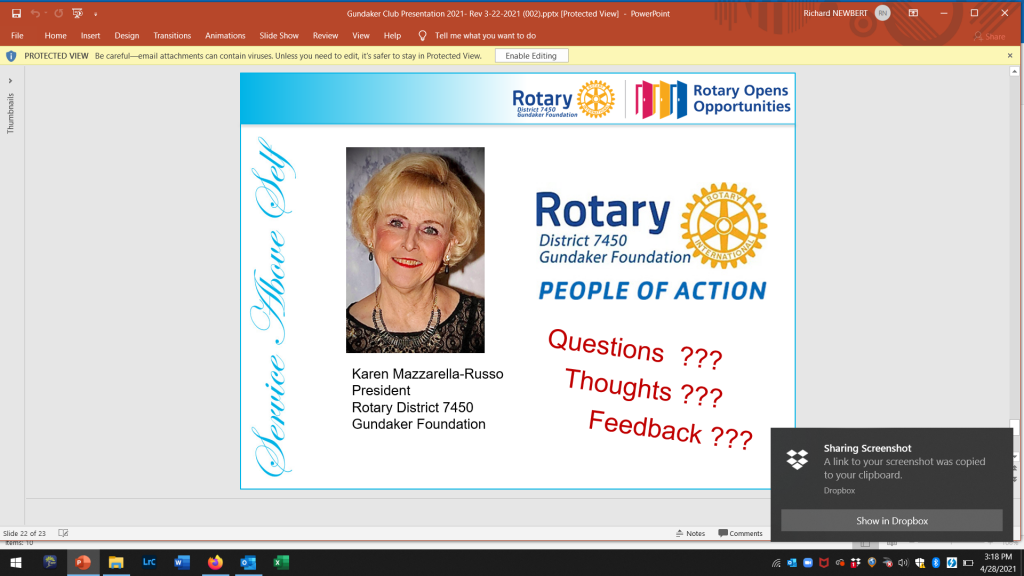 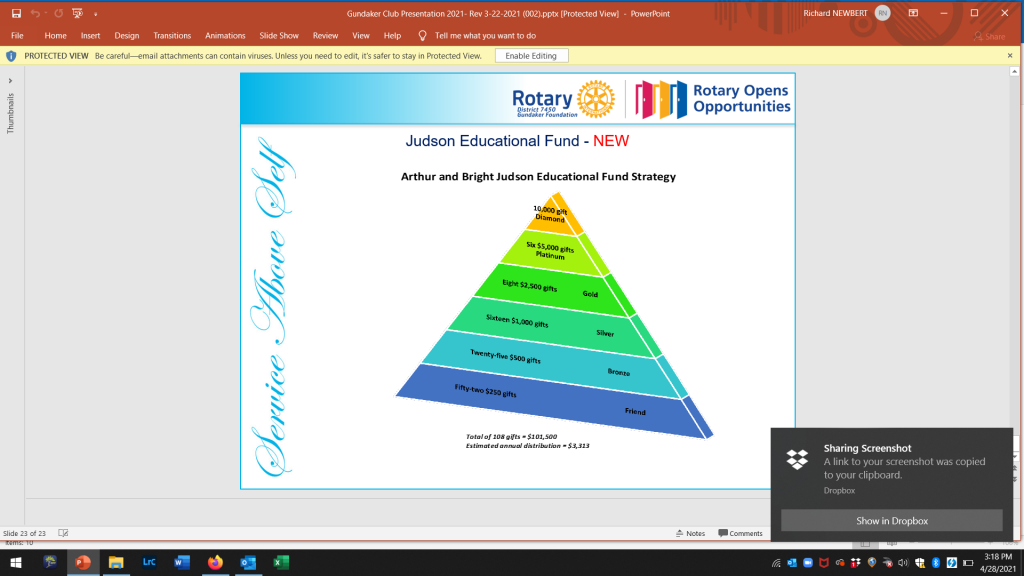 At the conclusion of Karen's presentaiton and soem brief discussion, the members voted to appropraate the eequivalent of $10.00 per member and joing the Gundaker Foundation beginning with their new 2021-22 fiscal year on July 1st.

After more than a year and with every member of the Club having received their COVID-19 vaccination shot(s), we are planning the resumption of our weekly in-person meetings at the Garden of Eatin' Restaurant at 964 Woodbourne Road in Levittown on Wednesday, May 12th at the regular time of 8:00 AM 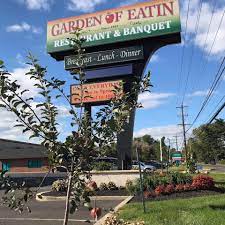 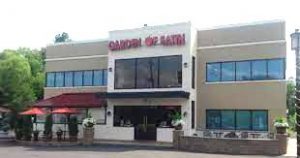 All appropriate CDC and Pennsylvania recommended COVID protocols will continued to be observed, as will any related requirements of the Garden of Eatin', as we hopefully begin to return to the interpersonal comdarerie which has been a hallmark of our club since its 2006 formation.

This past year has been a challenge for everyone, the pandemic's shutdowns and other restirctions limiting our ability to provide the levels of financial, in-kind and volunteer aid for many of the causes and programs our members have supported over the years.

Still, Zoom (which 14 months ago none of us had ever heard of) has enabled our members to continue to meet on a weekly basis … while our virtual walk generated significant donations for the Leukemia & Lymphoma Society and A Woman's Place … with other creative initiatives enabling us to provide ongoing support for veteran-related programs and food and other necessities for some of the families of the students who attend the William Dick School.

For anyone interested in helping worthy causes, organizations and individuals in need, while working along side some amazing and dedicated neighbors, our meetings are alawys open and welcoming!

"The purpose of life is not to be happy. It is to be useful, to be honorable, to be compassionate, to have it make some difference that you have lived and lived well."

Bill Gross, a representative from and advocate for Fair Districts PA joins us this morning.

Fair Districts PA is a nonpartisan, statewide coalition of organizations and individuals working to create a process for redistricting that is transparent, impartial, and fair.  The organization was founded in January 2016 by representatives from the League of Women Voters of Pennsylvania, Common Cause Pennsylvania, Committee of Seventy, Pennsylvania Council of Churches, and others concerned about accountable government.

Today, Fair Districts PA is officially a project of the League of Women Voters or Pennsylvania, a nonpartisan political organization which encourages informed and active participation in government, works to increase understanding of major public policy issues, and influences public policy through education and advocacy.  It receives no funding from political action committees (PACs) or political parties, and is funded and endorsed by a wide range of local and statewide organizations and individuals across the Commonwealth.

Their dedicated membership is comprised or Pennsylvanians from all walks of life, united by the conviction that free and fair elections are the foundation of our democracy. They believe Pennsylvania needs to reform its redistricting rules to promote competitive elections and partisan fairness—so that our government truly is of, by, and for the people.

To accomplish these goals, Fair Districts PA holds informational events, drive outreach to lawmakers and the media, and help the public take action. Our current focus is to replace the current partisan redistricting process with a transparent and accountable process before the release of the 2020 U.S. Census.

Fair Districts PA has grown quickly from a handful of volunteers to a network of local groups, regional support teams, active working groups and almost 100 trained speakers reaching audiences large and small in every corner of the state. FDPA volunteers come from across the state and bring a wealth of experience, expertise, and varying political perspectives.

A core part of his presentation revolved around his Power Point presentaiton.  This informative document can be viewed on Dropbox at:

The ultimate goal of Fair Districts PA is to ensure districts allow the voters to choose their elected officials rather than letting politicians in Harrisburg “slice and dice” the census numbers allowing them to choose their voters.   This will require a more transparent process, public engagement, and clear, measurable map-drawing standards.

The Legislative and Congressional Redistricting Act (LACRA) has all three.

What will LACRA give us?

The Legislative Congressional Redistricting Act has been introduced as House Bill 22 and Senate Bill 222. If passed, LACRA will require the following fair rules for redistricting.

Several members remarked that Bill's was one of the most interesting and informative speakers we hosted in a long while.