Dr. McGrath has a PhD. From Lehigh University and her areas of expertise is Post-WWII History, particularly the 1960s.  She has just finished a book entitled Food for Dissent.  She focused on one of the themes in the book, the rise of natural foods in our culture.  Andrew Weil, a Harvard educated physician with a specialty in botany, is considered by many to be one of the founders of the natural food movement. In the mid-sixties, Weil, Richard Alpert, and Timothy Leary were among the earliest researchers on the impact botanical and synthetic drugs had on the brain. All three wrote articles about how such drugs as pot and LSD were going to change the world.

In the case of Alpert and Leary, they were fired from Harvard labs for experimenting with such drugs. Weil escaped that fate and went on to publish a landmark study on the Clinical and Psychological Effect of Pot on Men.  Its key finding was that the mindset of the individual directly affected the body’s responses, both placebo and experimental (who used cannabis) groups in his study showed improvements.

Weil’s work was picked up by the print media, and he became an even stronger proponent of the mind/body correlation. In addition to his private practice, Weil branched out into related products as services for the mass market. In two other books in the 70s, The Marriage of the Sun and Moon and Chocolate to Morphine,  Weil tried to convince Americans that altered states of consciousness existed and could, indeed, have a positive impact on health.  Unfortunately, with our focus on a “war on drugs”, Weil did not immediately find support for his views. However, over time and in part due to his PBS series and high-profile clients, he developed a large following in the 80s to present day.  He was, and remains, one of the key leaders in the integrative health movement worldwide.

Weil Lifestyle LLC, his parent company, is very successful. Weil continues to teach at the University of Arizona, make selected TV appearances (on Dr. OZ, for example), and give speeches on his latest findings. He started a restaurant chain, “True Food Kitchen", and continues to staunchly defend “natural remedies, self-diagnosis, and avoidance of traditional doctors”.  Dr. McGrath suggested that perhaps one of the reasons we have not seen a broad expansion of some of his dietary recommendations is that natural foods cost more—in time and preparation. While Weil’s intentions are great, there are many millions of families who simply can’t afford to implement his recommendations.

After receiving a rousing round of applause at the end of her presentation, Dr. McGrath fielded our questions. She is also teaching an “almost all retiree” American History course starting on August 21 on the 60's. You can still sign up for it next week and join Irv and Alan in attending it! 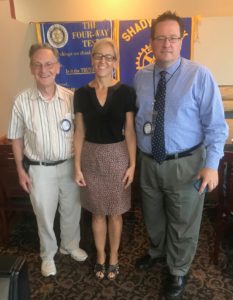