Today,  donations the Club received from the Grey Nun Academy and which have been stored in Dolly's and Dick's garages, 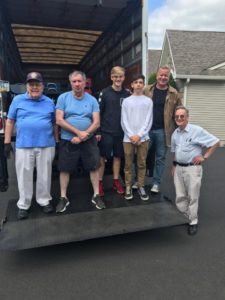 were delivered to the William Dick School Jeff used his truck to get chairs and books stored at Dolly's and bring them to Dick's driveway.  Jerry ,Irv, and Larry (newly engaged to Lou) ,Jeff, myself and Irv's friend Bo , who brought the truck, and his son and a friend loaded up Bob's Truck in record time.   In addition, Alan had his SUV loaded with all of your donated items (2,500 pencils, 400 boxes of crayons,125 pairs of socks, donated clothes, 300 notebooks,and other school supplies).

Irv drove down to the school with Alan acting as a "tour guid", navigating their way around closed streets in North Philadelphia.  The planned  route was to get off at Aramingo Ave, then to Lehigh and then the plan was to to turn on 22nd street to Diamond and then to 25th where the School is. Girard ave exit is closed so this was the best route for the Truck.  But just as they approached 15th and Lehigh, a massive number of police cars blocked our way and we had to use narrow streets where the truck barely fit.

The good news is that the Club's caravan made it to the School and the entire William Dick teacher staff poured out to unload, 75 chairs, 10 tables, two rolling tables, and much more, plus Alan's SUV in olympic time. 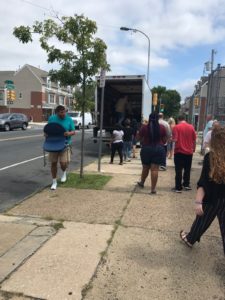 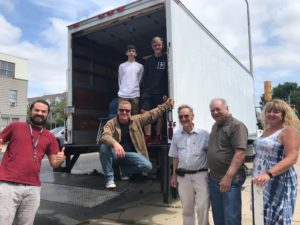 We received many thanks for helping their students plus the 55 cases of copy paper.