Last week, the Club became aware of an area Vietnam veteran and purple heart recipeint and has since become a cancer survivor whose washing machine failed.  While this veteran was not destitute, he was facing challenging economic times .

When the waashing machine was insepcted by a service technician, it became clear that repairs would be extremely extensive and very costly  At teh same time, purchaisng a replacement became the logcal and most cost effective alternative.

Fortunately, over time, the Club had collected monies through several donation jars placed in local retail locations. At yesterrday's Board meeting it was agreed to make a donation through VFW Post 6393 in Yardley which would prvide the monies directly to the veteran to help with the cost of a new washing machine. 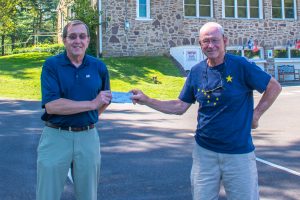