We were delighted to have Morris Holland Derry, III, speak to our Club remotely this morning. 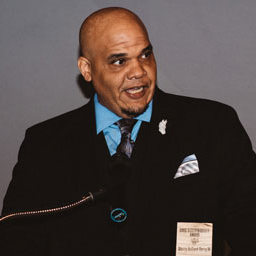 Morris is a most interesting individual who, against all odds, transcended having been incarcerated for 5-6 year term to becoming an entrepreneur committed to helping the homeless, addicted and other nearly invisible and underserved populations in Bucks and Philadelphia counties.

Beginning in 1996 while serving his sentence be became aware of the high number of people he saw who were released from prison only to return a short time later.  After his release in 2000, Morris successfully completed his subsequent parole without incident.  Fast forward to 2016, with the help of Bucks County District Attorney Matt Weintraub and the County Probation office, founded No More Pain, Inc., a non -profit organization that mentors individuals who suffer from substance abuse, domestic violence, homelessness, cancer, ex-cons and youth development.   His organization is analogous to Big Brothers Big Sisters, except it targets adults … hoping that through mentoring those who often have no hope to give them a different outlook and succeed against seemingly insurmountable odds.

He jokes that he has told Matt Weintraub that while he will never be out of a job prosecuting violators of the law, he hope he can at least see that the DA stops seeing the same repeat offenders time after time.

Morris has also dedicated his life to helping others in a variety of ways.  Over the last eight years he bas gone out faithfully 3-4 nights each week, not only to hand out pizzas other donations, but also to spend time and talk with everyone he meets.  His only goal is to change and save lives.  Morris has assisted people to get into treatment centers, detox and rehabs.

For former felons, he has worked to develop apprenticeship programs with corporations, including McDonalds.  As No More Pain does not have any outside funding, he is unable to take in and establish mentoring programs for as many people as he would like.  Most of those in these programs come through the Bucks County Probation system.

Morris emphasize that the people he seeks out and works with do not all come from lower-income and blue collar locals like Bristol, Kensington, or Morrisville but also more affluent communities such as Newtown.

The conversation moved on to the Black Lives Matter movement in which Morris has participated and been aa guest speaker.  While he deplores the looting, burning and other violence which has accompanied too many of the recent demonstrations, those participating represent just a small fraction of those who are out peacefully protesting the discrimination which has been faced by African Americans for 401 years.

He, as other Black in the country, has become frustrated that in the years since the slaying of Eric Gardner on July 17, 2014 and the tragic and unnecessary death of George Floyd on May 25, 2020, there has been far too little progress toward fully equality in America for people of color.  While peaceful protests can bring the disenfranchisements of and challenges facing communities of color and result in "promises" to rectify those situations, once the demonstrations end, so does all too much of the work necessary to fulfill those promises.

Morris has participated in some 33 recent protests, from Doylestown to Bristol; in each instance respecting the spirit of Martin Luther King, Jr.'s vision of non-violence.

Club member Fran Zeiter suggested that Morris and his organization might accomplish even more if they used the next few weeks to encourage as many of the people he comes in contact with the complete their Census forms (current deadline, September 30th), and also to both Register to Vote (October 19th) and the Vote, either by mail (Mail-in voting application deadline October 27th) or in person on November 3rd.

Also discussed were ways our Club might be able to reach out to attract new members who are both younger and from more diverse communities. On the other side of the coin were ideas on encouraging the communities of color to take the steps to become involved in local, service organizations such as Rotary.  On a related note, Morris did share that at one time when Bristol Borough advertised several job openings and its hope to attract applicants of color, there were not responses.

When the COVID-19 pandemic restrictions allow out Club to meet inperson, we hope to have Morris back to meet us in person.