Rotary Club of Shady Brook president Bob Morris was honored to present fellow club member Dr. August (Augie) Adrid with a certificate and pin recognizing him as a Rotary International Paul Harris Fellow.  In order to qualify as a Paul Harris Fellow, a Rotarian is recognized when they have donated $1,000 or more at one time or over a period of years to the Rotary Foundation, Polio Plus, or other approved Foundation grants. 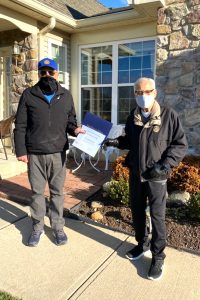 The mission of The Rotary Foundation of Rotary International is to enable Rotarians to advance world understanding, goodwill, and peace through the improvement of health, the support of education, and the alleviation of poverty; preventing disease, providing clean water, supporting education, growing local economies, saving mothers and children and promoting peace.  For as little as 60 cents, a child can be protected from polio, $50 can provide clean water to help fight waterborne illness and $500 can launch an antibullying campaign and create a safe environment for children.  Some of the Foundation’s monies are used as grants for local Rotary clubs.  In the case of the Rotary Club of Shady Brook, its grant monies have been used to help it continue its 12-year support of Philadelphia’s William Dick School.

Through its Polio Plus initiative, Rotary, as a founding partner of the Global Polio Eradication Initiative, has played a major role in reducing worldwide polio cases by 99.9 percent since its first project to vaccinate children in the Philippines in 1979.  Rotary members have contributed more than $2.1 billion and countless volunteer hours to protect nearly 3 billion children in 122 countries from this paralyzing disease.  Rotary’s advocacy efforts have played a role in decisions by governments to contribute more than $10 billion to the effort.  Today, polio remains endemic only in Afghanistan and Pakistan.  But it’s crucial to continue working to keep other countries polio-free.  If all eradication efforts stopped today, within 10 years, polio could paralyze as many as 200,000 children each year.

When he received his Paul Harris recognition, Dr. Adrid said, “I am deeply honored to be a member of an organization that sponsors so many worthwhile projects, locally and internationally.  Rotary’s international outreach has been of special importance to me given the fact I was born outside the United States of America.”

Dr. Adrid, a founding member and former president of the Rotary Club of Shady Brook, played the leading role in the Club’s first International project; providing clean water for the village of Big Rock in the province of Abucay Bataan in the Philippines, not coincidentally the country where Augie was born.

The village’s only water supply for 600 plus residents was from a stream which was used for bathing, washing clothes and drinking.  Shady Brook Rotary, in partnership with a local Rotary Club in the Philippines hired a contractor to dig a deep well and provide a storage tank so clean water would always be available.

On February 28, 2012, Dr. Augie Adrid, attended the ceremony dedicating the well to the village.  Dr. Adrid’s brother Rene who lives in the area, was instrumental in the completion of the project.

Pictured at the ceremony are Dr. Adrid and Ana Santiago the Mayor of the province.

Dr. Adrid remains active in many of the Rotary Club of Shady Brook’s service projects and initiatives.  In addition to chairing the Club’s Maple Point Middle School (Langhorne) Student-ot-the-Month recognition program and its annual Neshaminy High School Scholarship award program, he has been active in helping to provide support for our area’s local veterans, fundraising for the Leukemia & Lymphoma Society and its annual Light the Night walk, feeding residents at AstraZeneca’s Hope Lodge, raising funds to support Bucks County’s A Woman’s Place domestic shelter, charity golf outings and even helping with the club’s semi-annual Adopt-A-Highway road clean-up efforts.  His life before and since joining Rotary has always exemplified Rotary’s motto of “Service Above Self”.