Since the Club’s incorporation in 2006, it has provided more than $210,000 in cash and over $50,000 of in-kind contributions to support many health, community service and veteran-related causes and raised disaster relief funds in the aftermath of both domestic and international natural catastrophes.  Club members have also donated well in excess of 10,000 volunteer hours assisting many area organizations and causes.  It also recognizes and provides scholarships to a local, high-achieving middle school student-of-the-month and high school student-of-the-year.

However, the Club’s most important and meaningful initiative has been its ten-year support of Philadelphia’s inner-city William Dick School.  Opened in 1953, for originally K-5 students, the full-city block school was built on land once used as a cemetery and donated by a local financial planner named William Dick. 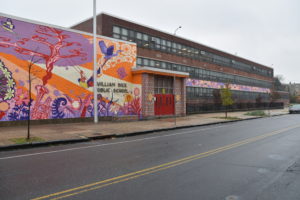 Today, the William Dick School is located in one of the city’s most economically disadvantaged (96%) neighborhoods in which gang presence is pervasive, drug use is widespread, teen pregnancy rates are troubling, and the area ranks as second in the city in terms of the number of daytime shootings.  The parents of a number of the students never completed high school; while many of its students come from single-parent homes and some have lost family members to street violence and overdoses.  Additionally, it is not unusual for a few students to be on probation or under court-mandated house arrest (other than for school attendance).

At home, a number of students do not have the luxury of nourishing daily meals and often lack the necessary clothing for Philadelphia’s unpredictable wet and winter weather conditions.

As a result, the school is challenged with not only educating its current 550-plus K-8 student body but also having to deal with often undernourished children; students lacking proper clothing for inclement and winter weather; many dealing with severe emotional and physical problems; and parents sometimes keeping their children out of school to watch younger siblings, run errands or otherwise assume what would normally be considered parental responsibilities.

Exacerbating these circumstances is a severe lack of state and local funding which has resulted in an inability to hire badly needed staff; purchase essential classroom supplies (including such basics as copy paper), an adequate number and diversity of books for its library, physical education equipment; and acquire other resources important to providing a robust education for its students.

Due to the economic poverty demographics of the area in which the school is located, it receives funding to be able to provide breakfast and lunch for 100% of its students.  However, when the children are not in school, hunger and proper nutrition can continue to be challenging for some of the students.

Alan Agree, who had known Amy Williams for many years, became aware of the multitude of challenges Amy would face when she became principal of the Williams Dick School in 1999.  After joining the newly established Rotary Club of Shady Brook in 2006, Alan felt the Club could offer assistance to the school, its students and faculty. 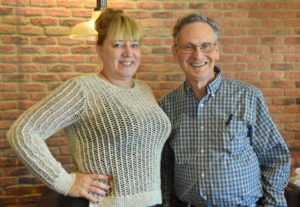 When Alan first raised the idea of supporting the William Dick School, he ran into some opposition since it was not in the geographical area in which the Club’s members lived and worked and some members felt its emphasis and resources should be directed toward the local school district.  Not to be deterred, he successfully argued that the Club could have a far greater impact on the lives of young, mostly minority students by supporting a public school servicing children whose lives might otherwise be held captive by impoverished and frequently dangerous environments and in which the school lacked the funding and resources enjoyed of the local school district.

Among the Club’s initial efforts were to make an application for a $500 matching District Grant which was subsequently awarded.  Concurrently, the Club also began to identify other specific needs of the school and started to acquire library books, paper, other schools supplies and even clothing that it was then able to donate to the school.

Under the leadership of Principal Amy Williams and her incredibly committed faculty and staff, the William Dick School soon became not only a place for learning but also a refuge from an often-dangerous community in which her students lived.

Appropriate dress codes and requiring respect for fellow students, faculty and visitors to the school have proven effective tools in helping to develop behaviors and attitudes to which they are often not exposed to when not in school.  The school’s prominently posted “ROAR” expectations for student decorum have become more than just words but important goals whose results are obvious when entering or walking through the building. 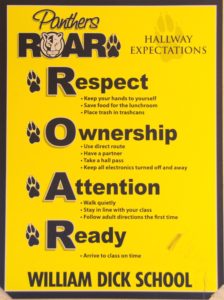 As a result of these and other efforts, William Dick’s students actually look forward to going to school as, among other things, it offers them a friendly, caring and safe environment.

During the past decade, a combination of $8,000 in District Grants which were more than matched by our Club for a total of well over $16,000 has been raised and presented to the school to meet a number of otherwise unfunded but badly needed supplies and other necessities to improve the school’s ability to deliver the best education possible to its students.  The Club has also provided additional monies to fund school bus trips, student awards, headphones for use with classroom computers, moveable whiteboards and other items.

In addition, through the generosity of its members, the Club has donated hundreds of reams of paper, an untold number of pens and pencils, other classroom supplies and support items, over a thousand books for the school’s library, six hundred book bags, seven hundred winter coats, a thousand pairs of socks, sweaters and other items of clothing for the students.

On the days when the Club makes its “deliveries”, the excitement is equally evident among both students and faculty. 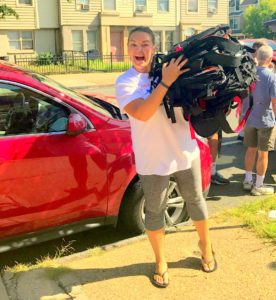 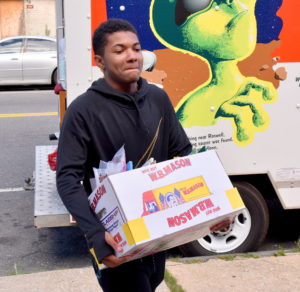 Through its relationship with the Villas at Shady Brook’s “Chicks with Sticks”, some 650 winter hats were knitted and donated to the William Dick School … 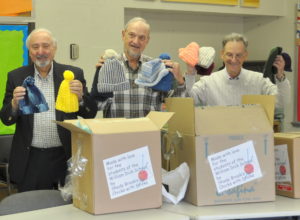 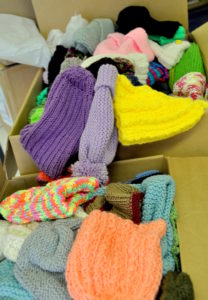 Some of the hundreds of unique and colorful winter hats

providing every student with their own unique hat.  Since then, additional hats have been supplied to accommodate incoming students and for those who have outgrown the ones they originally received.

At a monthly dinner meeting several weeks after the first delivery of hats, the Chicks with Sticks were surprised when Amy Williams presented a photograph taken from the roof of the school of the entire student body, each wearing a newly knitted hat and spelling out, “Thank You”, to show their appreciation. 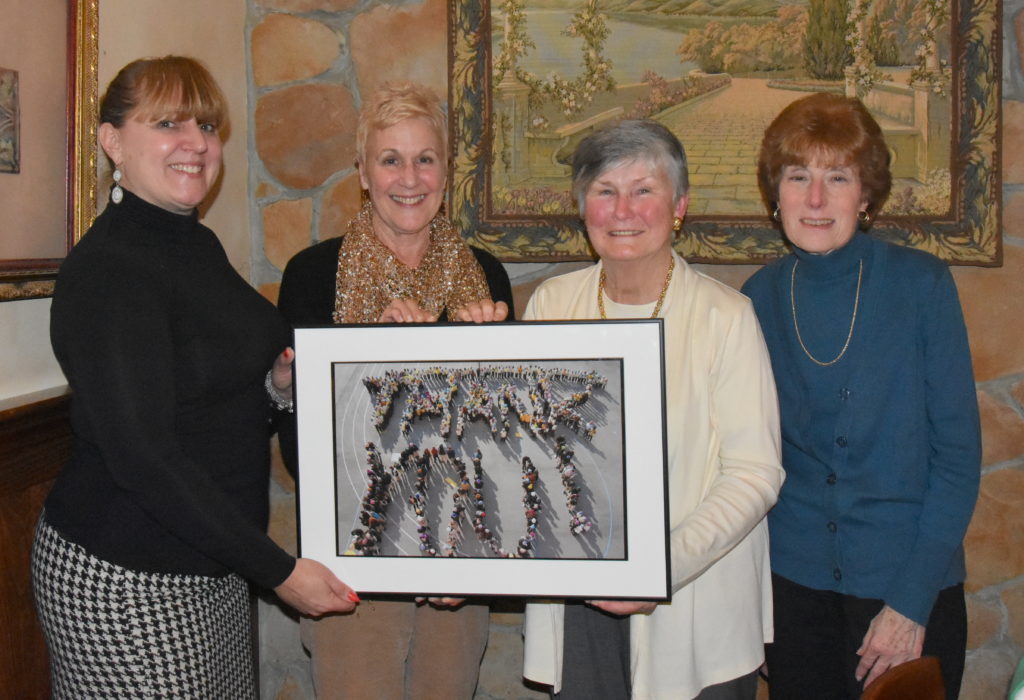 (l to r)  Amy Williams and just three of the dozens of “Chicks with Sticks”, Debbie Newbert, Pat Sauer and Mona Klugman

Recently, the Toll Gate Grammar School in Pennington, NJ was replacing most of their gym mats, athletic balls and other physical education equipment as well as discarding several dozen student and adult chairs, books and other educational materials.  When the Club learned about their availability through the wife of one of our members who had previously worked at the school, it was able to convince Toll Gate to donate these items to the Club … which then immediately donated and delivered them to the William Dick School.

Upon arrival at the school, we were greeted by a crew of 8th grade boys and faculty to help unload our truck and other vehicles 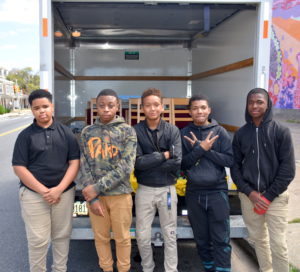 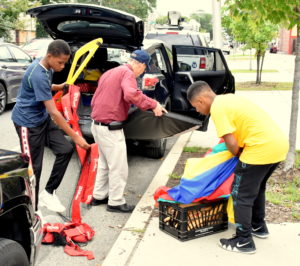 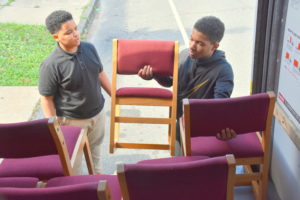 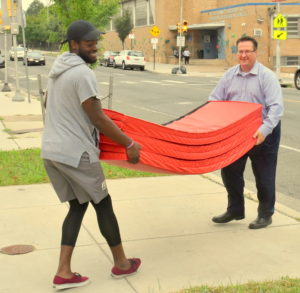 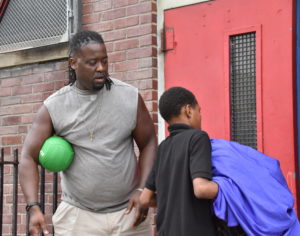 In early December 2018, the Club and Amy Williams formally recognized and thanked Toll Gate’s Lee White and Suzanne Horsley who were instrumental in making these supplies and equipment ultimately available to the William Dick School.  Amy also presented a Certificate of Appreciation to the Toll Gate Grammar School. 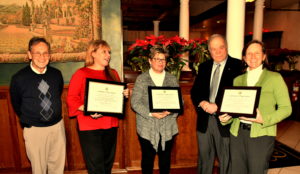 In June 2019, the Grey Nun Academy, a K-8 Catholic school unfortunately had to close its doors.  Upon learning this, Dick Newbert reached out to Mrs. Deborah Kost, the schools, head administrator inquiring if any of the school's equipment, books and other materials might be made available to our Club for onward distribution to the William Dick School.  After a favorable response, we were able to obtain dozens of Chromebooks and a 30' truck load of other equipment and furniture which will be provided to the William Dick school prior to the school's opening in the fall school opening. 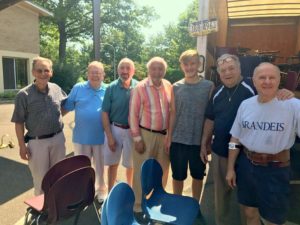 Concurrently, the Club has recently received its 2018 matching District Grant for the William Dick School and plans are already in progress for purchasing and/or obtaining donations for additional needed supplies and equipment for the school in 2019.

However, the most singularly rewarding aspect of our Club’s involvement with the William Dick School has been and remains the opportunity for Club members, together with their spouses/significant others who frequently join them during visits to the school, to sit in classrooms and help primarily the younger students with their reading, math and other academic skills. 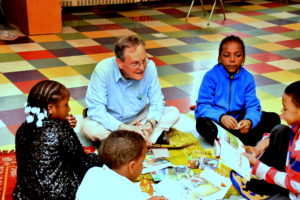 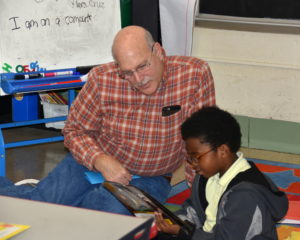 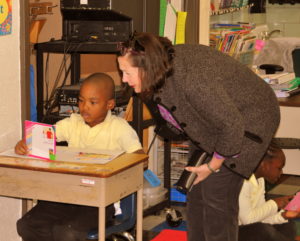 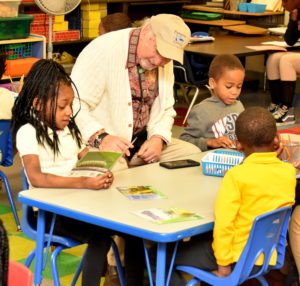 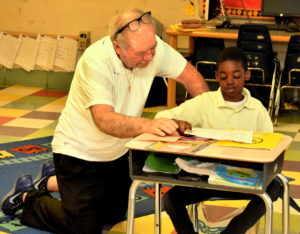 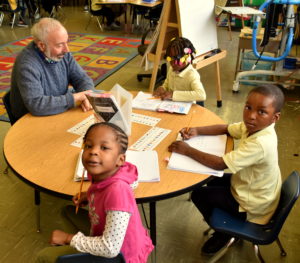 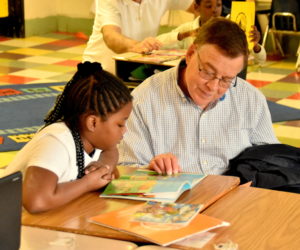 Without exception, these moments provide the most vivid, gratifying and lasting memories of our time at the William Dick School.

If, as it has often been said that; “a picture is worth a thousand words” …  if so, 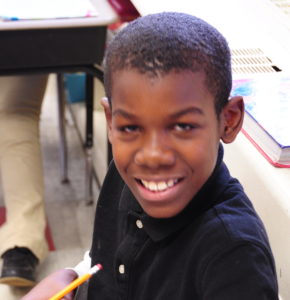 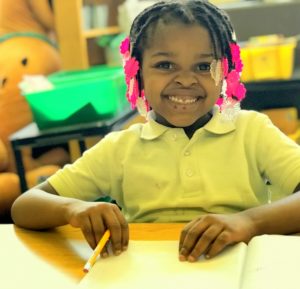 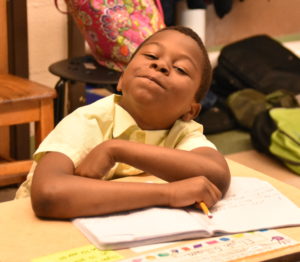 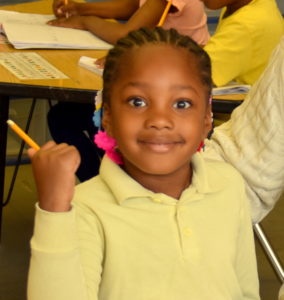 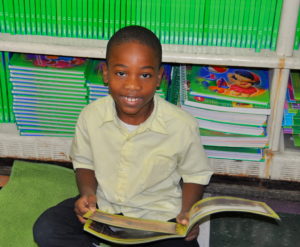 then these students have given ust a priceless and indelible reward!

In Philadelphia, graduating 8th graders can apply to be accepted by any public or charter secondary school across the city or be relegated to the neighborhood high school, which in the case of the area of the William Dick School is far from academically best or most optimal fit for individual students.  Further, these high school applications must be made online and subject to certain deadlines.

As many of William Dick’s students lack the adequate or even any Internet connectivity at home, Amy and her exceptionally dedicated faculty and support personnel meet with and assist each student to complete and submit their applications in a timely manner.  It is a tribute to them that a remarkable 90% of the William Dick 8th graders are generally accepted at one of their five choices.  That some of its graduates have gone on to such colleges as Penn State, West Point, Bloomsburg University, and West Chester University is a further testament to the academic foundations the William Dick School has been able to provide.

Our Club is extremely proud to have been formally recognized in the school’s entrance foyer for its long-standing commitments and modest contributions to make the William Dick School a well-equipped place for children to learn and hopefully build the education foundations to permit them to believe they can realize a brighter future than they might otherwise see. 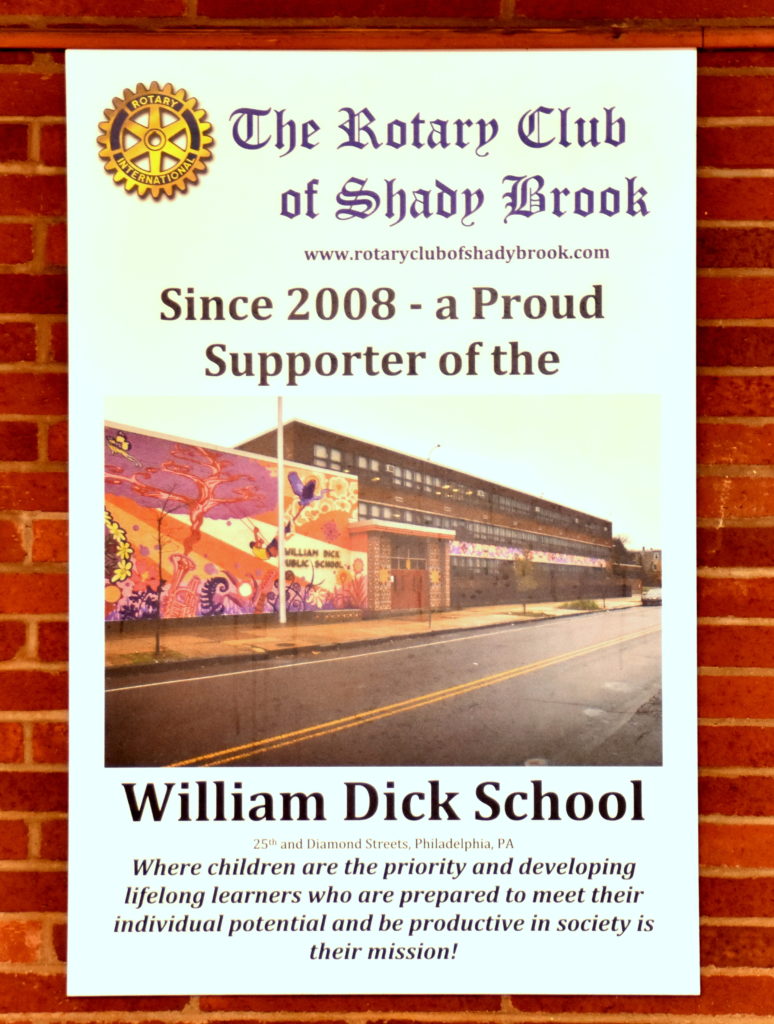 However, of all of our Club’s many programs and initiatives, our ongoing commitment to and ongoing support of Philadelphia’s K-8 William Dick School is the one in which we take the greatest pride and which continues to have the most profound, long-term impact on the lives of so many children.

More detailed information on our Club's involvement with and support of the Wiliam Dick School can be found throughout the Club News pages of this website.