Club president Bob Morris became the second member of the Rotary Club of Shady Brook to be recognized as a Rotary International Paul Harris Fellow in the past three months. 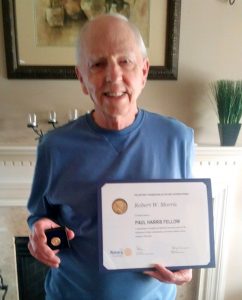 In order to qualify as a Paul Harris Fellow, a Rotarian is recognized when they have donated $1,000 or more at one time or over a period of years to the Rotary Foundation, Polio Plus, or other approved Foundation grants.

Bob grew up in Philadelphia, and is a U.S. Air Force veteran.  He had a distinguished, twenty-six-year career with the Philadelphia Police Department serving as a Police Officer, Sergeant, Lieutenant, Captain, Staff Inspector and retiring as a Police Inspector.  In a second career Bob was Chief of Police for Philadelphia’s United States Mint Police Force, retiring in 2004.

Throughout most of his career, Rotary has played a huge role in his life, first joining the Rotary Club of Northeast Philadelphia club in 1981.  He later became the club’s Speaker Chair, then club President in 1984-85 and followed that period as its Membership Chair.  After moving to the Villas at Shady Brook in Langhorne, Bob was the driving force behind the founding of the Rotary Club of Shady Brook and sand served two terms or its first President from 2006-2008.  In 2011 Bob was tapped as a District 7450 Assistant District Governor.  Things came full circle in 2020, when Bob became the club’s President for the second time while continuing to actively participate in the club’s many programs and activities.

The mission of The Rotary Foundation of Rotary International is to enable Rotarians to advance world understanding, goodwill, and peace through the improvement of health, the support of education, and the alleviation of poverty; preventing disease, providing clean water, supporting education, growing local economies, saving mothers and children and promoting peace.  For as little as 60 cents, a child can be protected from polio, $50 can provide clean water to help fight waterborne illness and $500 can launch an antibullying campaign and create a safe environment for children.  Some of the Foundation’s monies are used as grants for local Rotary clubs.  In the case of the Rotary Club of Shady Brook, its grant monies have been used to help it continue its 12-year support of Philadelphia’s William Dick School.

Through its Polio Plus initiative, Rotary, as a founding partner of the Global Polio Eradication Initiative, has played a major role in reducing worldwide polio cases by 99.9 percent since its first project to vaccinate children in the Philippines in 1979.  Rotary members have contributed more than $2.1 billion and countless volunteer hours to protect nearly 3 billion children in 122 countries from this paralyzing disease.  Rotary’s advocacy efforts have played a role in decisions by governments to contribute more than $10 billion to the effort.  Today, polio remains endemic only in Afghanistan and Pakistan.  But it’s crucial to continue working to keep other countries polio-free.  If all eradication efforts stopped today, within 10 years, polio could paralyze as many as 200,000 children each year.

Upon notification of his Paul Harris recognition, Bob was quoted, “I am proud to have joined so many Rotarians who have been recognized as Paul Harris Fellows, each of whose lives reflect Rotary’s motto of “Service Above Self”, through their contributions to Rotary’s local, domestic and international programs.”