Despite a heavy schedule, Bensalem resident and candidate for Sheriff of Bucks County took time to speak to the Club this morning. 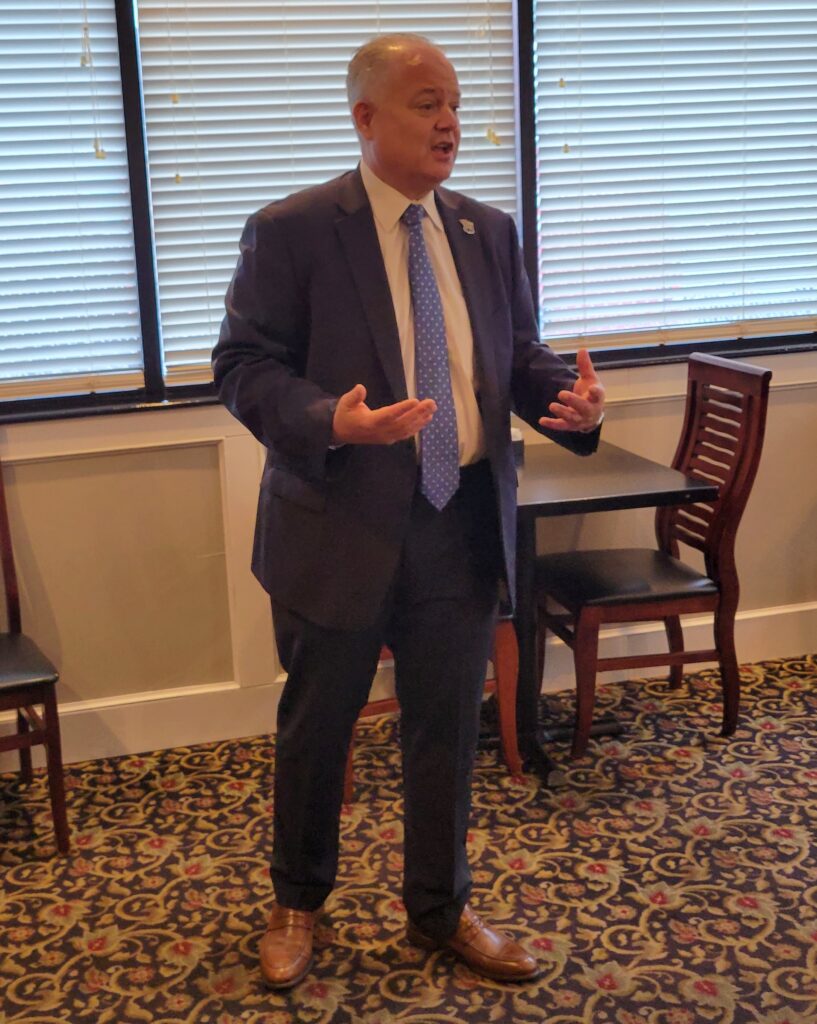 Director Harran, originally from New York, moved to Pennsylvania in 1982, where he received his Bachelor of Science Degree in Political Science.  He earned his Master’s Degree in Criminal Justice Administration from St. Joseph’s University. He is also a graduate of the Northwestern University School of Police Staff and Command.

Director Harran has served in law enforcement with the Bensalem Township Police Department in Bucks County, Pennsylvania for 34 years. Currently he serves as the Director of Public Safety for Bensalem Township.  As Director, he is responsible for the management and operation of the police department and for the coordination of the township’s Fire and Rescue departments.

He currently serves on many boards and organizations, including; a member of the Board of Directors for the Bucks County Drug and Alcohol Commission and the FBI’s Rapid DNA Task Group. He represents Pennsylvania at the State Associations of Chiefs of Police and serves as Chairman of the North Atlantic Region of the United States. He serves as a Vice President of the Pennsylvania Chiefs of Police and is on the Board for the Bucks County Police Chiefs.

He enthusiastically explained that one reason he loves police work is that “no two days are the same” and even if he “makes plans” they must invariably be changed due to unforeseen circumstances.

He gave a plug for not only his candidacy but those of incumbent Matt Weibtraaub (who as addressed our club in the past) and four other row office candidates.

He talked briefly about the department’s “Copsicle” program of providing free popsicles to township youth as a way of building bridges to the community and especially its youth.  Further, through his fundraising efforts, the program has had a zero impact on the Township’s budget.

One of his, and the department’s main concerns is drugs and the Opioids epidemic, in which the five county region leads the country.

He talked about BPAIR, Bensalem’s police’s addiction intervention and help program.  Fred is a staunch believer in providing help for the mentally ill and helping those addicted to substances medical intervention and treatment rather than criminalizing their behaviors.  In another staggering statistic, he mentioned that one in two people will, at sometime, experience legal and/or illegal drug problems.

There was a great deal of discussion around the proliferation of guns, stalled gun control legislation at the state and national levels and the Second Amendment.  Surprising to some, Harran does not believe that the Second Amendment is a license to permit everyone to own any type of gun. Rather, while is supportive of private ownership of guns for responsible people who are not a threat to themselves or others, he sees no reason for assault weapons, ghost guns and bump stocks to be freely available.

Moreover, he support closing the gun show and private sale loopholes where it comes to the registration of firearms.

At the same time, in his official capacity as a police officer, he is obligated to uphold federal and state laws which are on the books even if they run counter to his personal beliefs.

He takes pride in the recent agreement among the County’s 39 police departments when it comes to the “use of force”.

Not surprisingly, he does not think “defunding the police” makes sense, while the use of funds within police departments may need to be reallocated to meet the challenges facing today’s police departments, including placing more emphasis on mental health issues.

Fred spoke about the fears some people have of the police.  He also mentioned that in Bucks County “no knock warrants” are extremely rare and only permitted by a judge under the most dangerous an dire circumstances.  When asked about police stops, based on both his years in law enforcement and having been confronted by a policeman holding a gun to his head in New York when he was a youth, the best situation is to comply with the requests of an officer and calmly explain why the stop or confrontation might have been unnecessary as it was in his case. He commented than “the streets are not the place to argue with the police”.

Where the question of “bad” police personnel are concerned, he believes that there may be 1%-2% of police who should not be on the job and in his career, he has ersonally fired 26 police officers.

He believes that the two most important areas of concern to most Bucks residents are quality educational systems and safety.

When the Parx Casino was mentioned, he felt they were very good for the community of Bensalem and Bucks County.  Some $11.8 million is paid by Parx annually in lieu of taxes.  The casino also makes major contributions to the Bensalem MES.

When asked about his race for sheriff, candidate Harran would not attack his opponent whom he has met and characterizes as “a nice guy”.  That said, he believes his past and current uninterrupted experience in police work, relationships with all 39 of the county’s police departments, fundraising capabilities, and commitment to community relations with law enforcement and safety eminently qualify him and hopes it will convince voters to support him in November’s election.

The Club gave Fred Harran a round of applause, thanked him for his generous time and candidness and wished him well in November.